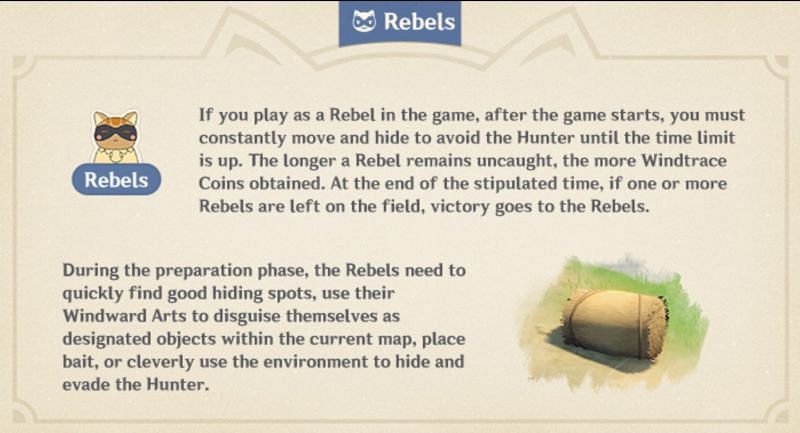 There are ways for a Rebel to succeed in the upcoming Genshin Impact event, Windtrace.

For those that don’t know, Windtrace is an upcoming PvP event where players on one team will be pitted against another team of real players. Except, this event is a modified version of hide and seek. In this situation, there are two teams: Rebels and Hunters. As this article is about how a Rebel can succeed, it’s vital to know that they’re the ones hiding.

There are some differences between those that hide in hide and seek and what a rebel can do in the Windtrace event in Genshin Impact. One of the most glaringly obvious differences is that a Rebel in Genshin Impact can use new combat arts to evade their pursuer. That is just one of many things a Rebel should keep in mind if they wish to earn many Windtrace Coins (they’ll earn more the longer they don’t get caught).

#5 – Know the layout of the Contested Zones

If a Genshin Impact player has to hide in any of these locations, it would only make sense for them to understand their layouts. If a player is doing the Windtrace event for the first time and doesn’t remember the layout of these maps, then they may pick a suboptimal hiding location.

Players also shouldn’t only memorize a good hiding location for just one of these maps, as the Contested Zone is chosen randomly. Hence, a player might still get a map they’re unfamiliar with.

Genshin Impact players should remember to earn more Windtrace Coins, by lasting for longer in the event. If they keep getting caught early, then they should take some time to find a better spot to hide in.

Some Genshin Impact characters are known for being extremely valuable when traversing through Teyvat. However, the Windtrace event is different from most other Genshin Impact events. Players’ combat arts are changed to something else during it.

Hence, players won’t be able to use Xiao’s impressive jumping, Keqing’s quick teleport, etc. for evading other players. Instead, they will have to rely on the new Windward Arts to avoid other players.

As a result of this, a character’s Elemental Skill and Elemental Burst aren’t as relevant in Windtrace as it is in other modes.

#3 – A Rebel can move when necessary

Some variations of hide and seek require those hiding to be perfectly still. However, the Windtrace event in Genshin Impact is not like those variations. Genshin Impact players should remember this, especially since they’re being rewarded for not being caught easily.

That said, players shouldn’t just move all over the Contested Zones where they might bump into a Hunter. It’s advisable to only move if you’re in an undesirable location or a Hunter is approaching.

It is possible for a Rebel to move out of a good hiding location and end up bumping into a location a Hunter can easily see them. As a result, a good Rebel should always be cautious when moving about.

#2 – Use the Windward Arts wisely

For example, a player disguising themselves as a crate shouldn’t hide right over a cliff, as that sticks out badly. However, if they a place bait there, foolish Hunters might pick it up and blind themselves. From there, they could even fall down, wasting precious time.

Every Windward Art does something interesting, so a Rebel should take full advantage of whatever selection they choose.

It might seem like a pain to collect a few Favors that spawn around the player, but the Windward Art players unlock for doing so is well worth the effort. If a player collects enough Favor, they will be able to use the Windward Arts known as Starstep.

Starstep is just a massive movement speed bonus that lasts for 30 seconds. 30 seconds is a long time to have a buff, especially in an event where the Rebels have to avoid being caught. Skilled Genshin Impact players will take full advantage of Secret Favors in the Windtrace event.

That said, sometimes it isn’t worth collecting a favor if a Hunter is standing right next to it. Genshin Impact players should use their wits when deciding what to do as a Rebel in the Windtrace event.