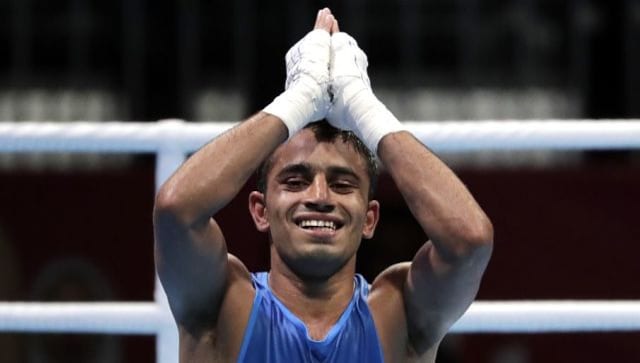 Dubai: Defending champion Amit Panghal (52kg) and Shiva Thapa (64kg) stormed into the Asian Boxing Championship finals with resounding victories even as an injured Vikas Krishan (69kg) signed off with a bronze medal on Friday.

Thapa, the first Indian male boxer in the tournament history to secure five medals, dominated top-seeded defending champion Bakhodur Usmonov of Tajikistan to make the finals with a 4-0 verdict.

However, Vikas, also bound for the Tokyo Games, endured a split decision loss to top seed and defending champion Baturov Bobo-Usmon of Uzbekistan.

The bout lasted less than one round as Vikas’ eye injury, sustained in the previous bout, aggravated forcing the referee to stop the contest.

Also ending with a bronze was tournament debutant and national champion Varinder Singh (60kg) after a high-intensity clash against Iran’s Daniyal Shahbakhsh. The Indian lost 2-3 after fighting his heart out.

Panghal was in top form as he took control with his sharp counter-attacks against the defensively weaker Bibossinov. The Kazakh is a world championship bronze-medallist and had lost to silver-winner Panghal in the semi-finals of that event as well.

The Indian played the waiting game to perfection as the third-seeded Bibossinov’s plan to dazzle him with early aggression fell flat as the bout progressed.

The World No 1 from Haryana became the aggressor in the final round as Bibossinov ran out of steam.

Panghal will square off against reigning Olympic and world champion Shakhobidin Zoirov of Uzbekistan in the final on Monday. It will be a repeat of the 2019 world championship final in which the Indian had lost to settle for silver.

It was slow domination for Thapa, who took a good measure of his rival in the opening round before unleashing some power-packed left hooks.

The Indian’s dominance reached its peak in the third round when Usmonov faced a standing eight count and Thapa taunted him with some well placed body blows.

On Thursday night, four Indian women boxers had advanced to the finals.

Of these, Pooja got a walkover after her opponent pulled out.

It was heartbreak for two-time world youth champion Sakshi Choudhary (54kg) as she lost her final spot after her rival, top-seeded Kazakh Dina Zholaman, successfully challenged the narrow victory that she had clinched in the last-four stage.
Sakshi had prevailed 3-2 in the regulation bout but the decision was challenged by the Kazakh team and eventually overturned.