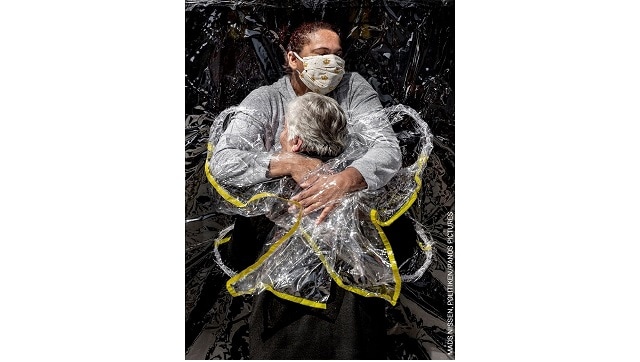 The World Press Photo Foundation announced the results of the 64th annual Photo Contest and the 11th annual Digital Storytelling Contest on 15 April.

The jury of the 2021 Photo Contest chose Nissen’s The First Embrace as the World Press Photo of the Year. In the image, Rosa Luzia Lunardi (85) is embraced by nurse Adriana Silva da Costa Souza, at Viva Bem care home, São Paulo, Brazil, on 5 August 2020.

This was the first hug Rosa had received in five months. In March, care homes across the country remained shut for all visitors as a result of the COVID-19

pandemic, preventing millions of Brazilians from visiting their elderly relatives. Carers were ordered to keep physical contact with the vulnerable to an absolute minimum. At Viva Bem, a simple invention, ‘The Hug Curtain’, allowed people to hug each other once again.

At Viva Bem, a simple invention, The Hug Curtain, allowed people to hug each other once again.

Nissen said about his image: “To me, this is a story about hope and love in the most difficult times. When I learned about the crisis that was unfolding in Brazil and the poor leadership of president Bolsonaro who has been neglecting this virus from the very beginning, who’s been calling it ‘a small flu’, I really felt an urge to do something about it.”

Nissen is a Danish photographer based in Copenhagen.

Antonio Faccilongo’s Habibi series chronicles love stories set against the backdrop of one of the longest contemporary conflicts, the Israeli-Palestinian war. The story shows the impact of the conflict on Palestinian families and the difficulties they face in preserving their reproductive rights and human dignity.

One of the images show Lydia Rimawi lying on her sofa in Beit Rima, near Ramallah, Palestine, on 20 December 2018. Her husband Abdul Karim Rimawi was arrested in 2001 and sentenced to 25 years in prison for involvement in the assassination of Israeli tourism minister Rehavam Ze’evi. Nearly 4,200 Palestinian security detainees are being held in Israeli prisons, according to a February 2021 report by human rights organisation B’Tselem. Some face sentences of 20 years or more.

The couple have a son, Majd, who was born as a result of IVF in 2013. In 2014, Abdul Karim was fined around $1,500 for smuggling his semen from prison, and deprived of family visits for two months.

Ahmed Najm, Managing Director of Metrography Agency and 2021 Photo Contest jury member, said about the story, “The photojournalistic perspective of the photographer, along with the uniqueness of the story, have created a masterpiece. This is a story of human struggle in the 21st century: a story about those unheard voices that can reach the world if we, the jury, act as a medium. It shows another side of the long contemporary conflict between Israel and Palestine.”

Faccilongo is an Italian documentary photographer represented by Getty Reportage.