As North Korea denunciates skinny jeans, a look at the garment’s symbolic importance, political journey over the years

Whether banning Western fashion in the Soviet Union or the burqa in France, political control over what we wear has always been controversial. But what is it about skinny jeans that apparently inspires a ban by North Korea today? 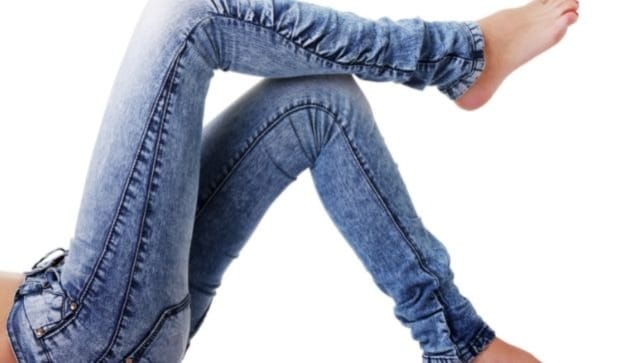 Denim jeans have long been political: now skinny jeans are in the firing line. Image via Shutterstock/The Conversation

Last week, reports emerged that North Korea was banning skinny jeans over concerns regarding their symbolic relationship with the “exotic and decadent lifestyle” of capitalism. The crackdown on “anti-socialist behaviour” also reportedly bans mullet, spiky or dyed hairstyles and piercings.

Although an official statement on the ban hasn’t been identified, policing of personal style in North Korea is not new.

Political leaders have long been aware of the representational power of fashion. In her book Fashion and Politics, fashion scholar Djurdja Bartlett notes that “as early as the 1920s, the Bolsheviks frowned on western fashion and its Art Deco opulence”.

The role of dress in promoting allegiance to the nation-state can come in the form of a uniform or via the rejection of garments seen to symbolise religious, ideological or political beliefs.

Whether banning Western fashion in the Soviet Union or the burqa in France, political control over what we wear has always been controversial. But what is it about skinny jeans that apparently inspires denunciation by North Korea today?

The skinny on skinny jeans

Slim or tight-fitted trousers are a direct descendant of tight men’s breeches worn in the 1800s.

Their denim offspring emerged in the 1950s as part of the counter-cultural movement. Most often worn in a dark wash with a cuffed hem, the jeans, favoured by the likes of Elvis Presley and Marlon Brando, were a gender-neutral representation of alternative lifestyles in the wake of the second world war. Marlon Brando rocking his jeans in The Wild One. Image courtesy: Stanley Kramer Productions via The Conversation

In the 1960s, jeans in the “drainpipe” style — black and ultra-skinny — became synonymous with rock and roll.

Through the 1970s and 80s, the UK embraced the punk look – pioneered by designer Vivienne Westwood and the Sex Pistols, which saw tight jeans ripped, stained and safety pinned. The Clash: skinny jeans were punk for a while. Image courtesy: Helge Øverås/Wikimedia Commons

The 1990s brought baggy styles for rave dancing, bootlegs and retro flares. But skinny jeans didn’t stay gone for long. The 2000s saw them taken up, again by subcultures — emos and goths, who wore them super tight and low on the hips.

By the 2010s they seemed destined to stick around after being championed by Kate Moss, the Duchess of Cambridge and Michelle Obama.

Rumblings of change in the denim market were first heard in the late 2010s, when fashion journalists including Sarah Spellings claimed we could begin counting down to the return of low-rise jeans. The rise of 90s nostalgia fashion, popularised by models such as Bella Hadid, bought a return of wide-legged fits and exposed midriffs.

By 2019, skinny jeans were reportedly being usurped by so-called “mom jeans”. And that was before 2020 forced everyone indoors, where comfort trumped more fitted styles.

So, if they’re no longer cool, why might North Korea want to ban them?

Read more: Dressed for success – as workers return to the office, men might finally shed their suits and ties

What we wear on our legs has long been a subject of particular political significance, especially in terms of class and gender differentiation.

During the French Revolution, full length trousers became synonymous with the ideals of liberté, égalité, fraternité — but only for men. Women remained bound by the Ancien Régime, excluded from wearing trousers and from the social freedoms they allowed.

It followed that in the fight for suffrage, trousers became a symbolic garment in the emancipation of women as political subjects.

In the 1960s, meanwhile, blue denim became a symbol of the US civil rights movement and in 1978, Levi Strauss & Co began large-scale shipments of jeans behind the Iron Curtain. A Wrangler jeans stall at an Australian rodeo show. Recent research in the US found Republican voters were more likely than Democrats to wear Wrangler jeans. Image courtesy: Jordan Baker/AAP via The Conversation

Most recently, a chief minister within India’s Bharatiya Janata Party government faced condemnation after he tweeted that women were immoral for wearing jeans that exposed their knees.

Across India women took to social media to voice their exasperation, posting photographs of themselves wearing torn denim with the hashtag #RippedJeans.

Ripped jeans or burqa both should be decided by the person and not be imposed on one. #rippedjeans #Burqa pic.twitter.com/zHn7GEntcq

Read more: How women in India reclaimed the protest power of ripped jeans

Jeans are still provoking the powerful. Still, if the reports from North Korea are correct, railing against this symbolic garment may have given those willing to rebel a clearer sense of what to wear.

Harriette Richards, is a Research Associate in Cultural Studies at, The University of Melbourne