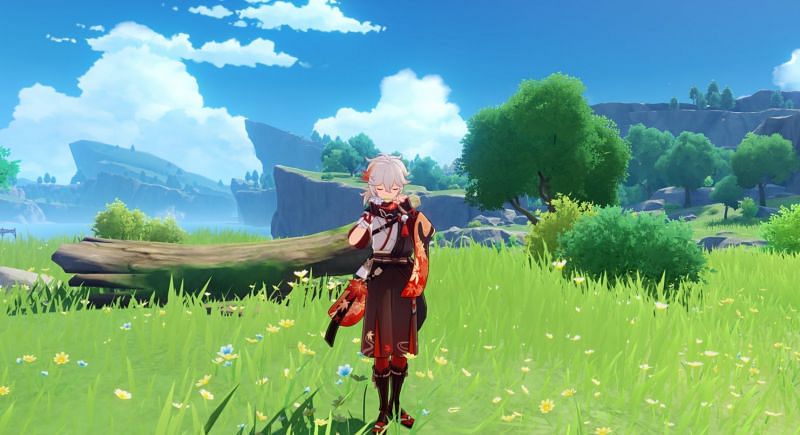 Everything known about the Samurai from Inazuma so far

Genshin Impact will soon add a new character, Kazuha Kaedehara. He has been thoroughly leaked, making this Samurai from Inazuma one of the most desired upcoming characters. Kazuha is a Ronin, or a wandering Samurai without a master. He joins forces with Beidou’s Crux Fleet in Liyue and will serve as a bridging point for players to reach the new region of Inazuma in the coming months. Players can learn everything that is known about Kazuha here.

Kazuha in Genshin Impact: Everything known so far

Kazuha had quite a lot of Genshin Impact leaks, including his Elemental Skill, Burst and even his Constellations and Talents. Players who want to wish for Kazuha can get a pretty good idea of the character from these leaks, allowing for a sneak peek far before he is released in Genshin Impact 1.6. Players can even learn about his trademark 5-star weapon, the Freedom-Sworn. All the current leaks about Kazuha have been compiled here, starting with his Elemental Skills.

Kazuha’s Elemental Skill, Chihayafuru, is a reference to ancient Japanese poetry. This ability will allow Kazuha to create a gust of wind that will propel him upwards, allowing him to perform an enhanced plunging attack known as Ranran Haishin. This ability will cause a swirl to be created in the AOE of the plunge, and it can be held to increase the size of the AOE. This ability will deal decent damage, scaling to a 365% Attack modifier at level 6.

Kazuha’s Elemental Burst in Genshin Impact, Manyou no Ittou, will feature Kazuha slashing his sword and creating a powerful whirlwind that will swirl elements caught within multiple times. This ability leaves a zone of Anemo in its wake, named Ruka Akino, and this will absorb any elements and take on their effect, dealing AOE damage to any enemies inside the area.

This will deal huge amounts of damage to large crowds of enemies, and it scales very well with Elemental Mastery. This ability will scale up to 367% Attack at level 6, with a large additional portion of Elemental Damage, scaling up to 56%.

2: Weathering Blade: If Chihayafuru comes into contact with Hydro/Pyro/Cryo/Electro while being used, Elemental Absorption will occur and it will deal an additional 200% DMG of that elemental type, which will be considered Plunging Attack DMG.

3: Windsong Poetics: Upon triggering a swirl reaction, Kazuha will grant teammates a 0.03% Elemental DMG Bonus to their respective Element for every point of Elemental Mastery he has for 8 seconds.

Yamaarashi Zanshin: The Ruka Akino field increases character’s Elemental Mastery by 200 when standing within it.

Fuushuu Kitan: Increases the level of Chihayafuru by 3.

Oozora Genpou: When Kazuha’s Energy is lower than 45, he may use Chihayafuru to gain 3-4 Energy. He also gains 2 Energy per second while gliding.

Ketsuseki Haku: Kazuha gains an Anemo Infusion for 5 seconds after using his Elemental Skill or Burst, and his DMG will increase by 0.2% for every point of Elemental Mastery he has.

And lastly it is expected that Freedom-Sworn will make it’s appearance as Kazuha’s 5* Sword of choice on release.
+10% DMG, gains stacks on Elemental Reactions. Consumes 2 stacks to give party 16% Normal/Charge/Plunge Attack DMG and 20% Attack for 12s.https://t.co/XmXk88GfJE pic.twitter.com/nrM8Te69ED

Freedom-Sworn will most likely be Kazuha’s weapon of choice in Genshin Impact due to its buff to Elemental Mastery synergizing incredibly well with his abilities. The bonus on this Genshin Impact 1.6 weapon gives a flat 10% buff to all damage dealt by the user, and users will gain a Sigil of Rebellion whenever they cause an Elemental Reaction.

After collecting two sigils, players gain 16% damage with all Normal Attacks, including Plunging Attacks, and they gain 20% Attack stat for 12 seconds. This is perfect for Kazuha as he uses his Elemental Mastery to boost the damage dealt by his Normal and Plunging attacks through his skills.

Kazuha will have to face the new Genshin Impact 1.6 boss, the Maguu Kenki if players wish to ascend the character, as he will require the Maguu Kishin as his ascension materials. He will also need a new flower named the Sea Ganoderma, and players will most likely encounter this flower in the new Archipelago region. Ascending his talents will require a Guide to Diligence and Gilded Scales, though this is subject to change as he is updated.

Kazuha will definitely be a character that many players try to wish for, as he is one of the coolest characters coming to Genshin Impact. Genshin Impact 1.6 will bring Kazuha and the new Archipelago region to the game, so players have a lot to look forward to.