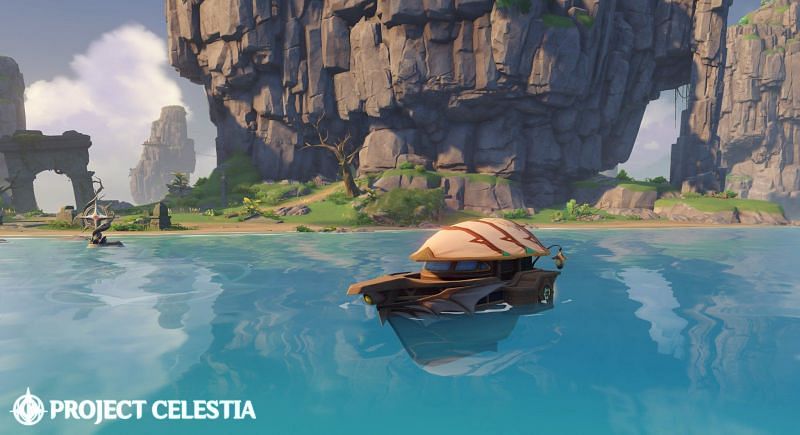 With this boating feature, players will be able to cruise around the new Archipelago region with ease as they use their boat to travel between Skiff Waypoints and explore the new area. With new quests taking advantage of the Skiff, and the ability to deploy it freely, players will definitely enjoy this new addition to Genshin Impact.

[1.6 Render] The Mystical Skiff.
The Skiff is a very mysterious waterborne vehicle that can be summoned to its skipper’s side using a Skiff Waypoint.
One person can only own one Skiff.

The Mystical Skiff is a new addition coming to Genshin Impact, and it will provide players with a new way to get around in the game, which will be especially useful as the coming region is full of water.

The Archipelago region will have plenty of seafront quests and areas to explore, and players will need to man their new boat to sail the high seas and get the most out of this coming expansion.

This image showcases some gameplay of the Mystical Skiff in action as it cruises along the ocean. There is a Stamina gauge on the Skiff that players will have to manage, which will prevent them from speeding across the ocean recklessly, but players will still be able to manage long distance travel with ease.

There seems to be obstacles in the ocean that may halt players, but they can use their onboard weaponry to deal with any enemies that show up to block their paths. The Mystical Skiff has a suite of features that are not yet fully leaked, but players can get a first look at the UI below.

This leak reveals some of the abilities that the Mystical Skiff will be able to utilize, and players can see several attacks and maneuvers that they will have at their disposal.

With two different cannon sizes, it seems like the Skiff is definitely capable of combat, and the sprint function is likely what will drain the stamina of the boat. The ‘Vejection’ function is definitely the most interesting, as ejecting from the Skiff could put players in harm’s way, so it will be fun to see how that mechanic will work out in-game. These Genshin Impact 1.6 leaks make the Skiff look like a fun new feature for players to sail around the ocean with.

The text leak from a Genshin Impact 1.6 Discord reveals some of the new quests that players will take on in the Archipelago region. These quests tie into the region of Inazuma, which is most likely how players will bridge the gap between Liyue and Inazuma in the future.

Players will be able to freely summon their Skiff on the Islands, making travel much easier, and there will be plenty of World Quests and Event Missions making Primogems plentiful in this new region. Players will definitely have a lot to look forward to in this new update.

The Mystical Skiff in Genshin Impact looks like a great addition to the game, and players will have to make great use of it as they explore the new Archipelago region.