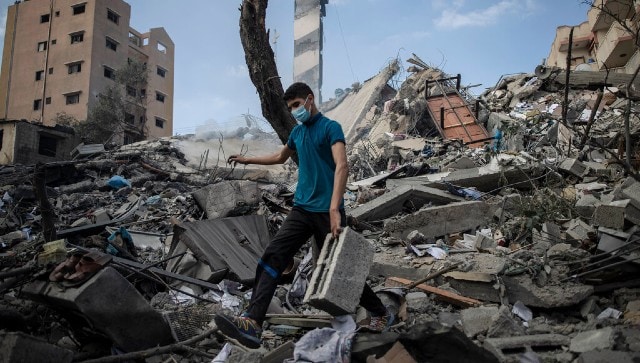 A Palestinian man inspects the damage of a six-storey building which was destroyed by an Israeli airstrike in Gaza City. AP

Zhang Jun, the current council president, confirmed that France’s UN Ambassador Nicolas De Riviere informed the council during the third round of closed consultations Tuesday on the conflict that a resolution was being prepared.

The United States has blocked the UN’s most powerful body, which is charged with maintaining international peace and security, from issuing a press statement calling for a halt to the violence, insisting that it would not help diplomatic efforts to end the conflict between Israel and Hamas.

Diplomats said the 14 other council members supported the statement proposed by China, Tunisia and Norway. But Security Council press and presidential statements require approval of all 15 members. Resolutions, which are legally binding, do not. They require at least nine “yes” votes and no veto by a permanent member. This would put the United States in the position of voting in favour, abstaining, or vetoing a cease-fire call.

Zhang told reporters that China, Tunisia and Norway “haven’t given up our effort and that draft statement stays there on the table, and we will continue to make our effort, making sure that the Security Council is fulfilling its mandate and responsibilities.”

See also  ‘Hygiene at point of care’ is WHO's theme for this year-World News , Technomiz

He said US President Joe Biden’s support for a cease-fire is “consistent with what we are proposing in the Security Council,” and China will support “all efforts facilitating the cease-fire, facilitating the ending of the crisis, and the coming back of peace in the Middle East.”

The proposed French resolution, drafted in coordination with Egypt and Jordan, could be circulated to council members as early as Wednesday and put to a quick vote, diplomats said, speaking on condition of anonymity because discussions were private.