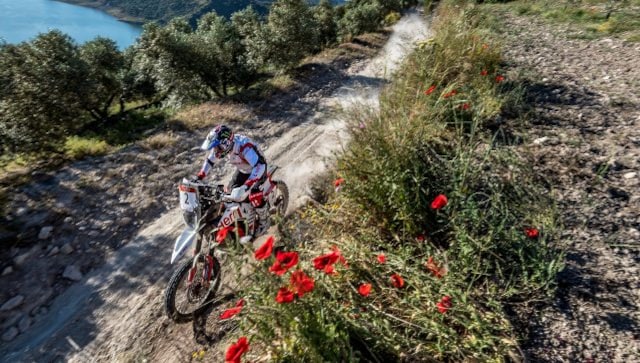 Franco Caimi in action for Hero Motosports at the Andalucia Rally. Twitter@hero_motosports

Villamartin: Hero MotoSports Team Rally missed out on the podium but its riders Sebastian Buhler and Franco Caimi finished a strong fourth and fifth, respectively, at the Andalucia Rally.

Barreda won the overall race, claiming the title that the squad had previously clinched in the first edition last year.

Barreda’s teammate Quintanilla turned out to be the winner of the total 185-kilometre special in his debut season for the side.

“It was a difficult final stage, opening the track from the beginning. It has not been easy at all. We went over the same stretches of very broken tracks that we had already been over in the last few days.

“I had to keep calm and hold a fast pace because I knew they were chasing me down, pushing hard behind me,” an elated Barreda said.

Quintanilla added: “We have finished the first race with the team and all I can say is that I am very pleased about it. It was a very hard week, super intense, but very important to be able to get to know the whole team, find some good sensations and get to know the way that the team works.”

However, it was disappointment for HeroMotoSports Team Rally as the side fell short after coming close to finishing on the podium.

Hero MotoSports Team Rally riders Rodrigues and Caimi started the final stage with the best chances of achieving a podium for the team.

Rodrigues made a strong start to the stage but settled on the side of caution owing to a couple of crashes and brought the bike home safely in the seventh position.

This was enough for him to earn fourth place in the overall standings, building upon his win in the Prologue and a strong performance throughout the rally.

“Today was a difficult day for me as I had a couple of crashes and hurt my hand and knee a little bit. So, I decided to slow down and focus on getting the bike to the finish safely,” Rodrigues said.

“I focused today on improving my feeling and confidence on the bike so I am happy to be at the end and with the way things have gone in my first rally with my new team,” Caimi said.

Buhler, who had received a 15-minute penalty on Sunday owing to an engine change effectively lost his chance of an overall podium finish.

Yet, he put the new engine to good use and achieved good speed to finish the final stage in fourth place. He finished the rally in the eighth position in the overall rankings.

“The bike worked really well and the team also made a great job so everything was perfect. I feel that I am getting better day by day and even though the results could have been better, overall we had a very good rally.

“I want to express my special thanks to our team and fans across the world,” Buhler said.

Next up for Hero MotoSports Team Rally will be the Rally Kazakhstan, scheduled from 7 June – 13 June.