Witnesses described squalid conditions and brutality in camps in the northwestern Chinese region of Xinjiang, with one claiming that a woman had died after undergoing forced sterilisation 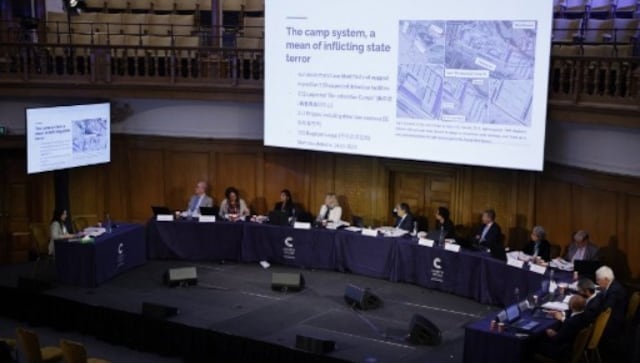 The panel is shown images of what witnesses say are re-education camps in China on the first day of hearings at the “Uyghur Tribunal”, a panel of UK-based lawyers and rights experts investigating alleged abuses against Uyghurs in China, in London on June 4, 2021. AFP

London: A London panel investigating the plight of Uyghurs in China on Friday heard witness testimony of torture and gang rapes, in a process slammed by Beijing as a mendacious smear.

Witnesses described squalid conditions and brutality in camps in the northwestern Chinese region of Xinjiang, with one claiming a woman had died after undergoing forced sterilisation.

The nine UK-based jurors of the “Uyghur Tribunal”, including lawyers and human rights experts, convened the first of two evidence sessions ahead of the intended publication of a report in December on whether China is guilty of genocide.

“Allegations made against the PRC (People’s Republic of China) are grave,” tribunal chair Geoffrey Nice said at the opening of the first four-day session, adding that they included numerous breaches of the UN Declaration of Human Rights.

The tribunal is not affiliated with any government, and China has refused to participate, branding it a “machine producing lies”. Beijing has slapped sanctions on Nice, a former UN war crimes prosecutor, and others involved.

However, lawyers for the tribunal said the US and Australian governments had offered to provide relevant material, complementing thousands of pages of documentary evidence already compiled.

See also  Withdrawal of American forces from Afghanistan is the right decision, Joe Biden said - got a tough lesson

It was set up at the request of the World Uyghur Congress, the largest group representing exiled Uyghurs, which lobbies the international community to take action against China over alleged abuses in Xinjiang.

But Nice and his colleagues have vowed that the panel’s work will be “impartial” and led by evidence.

Qelbinur Sidik, an ethnic-Uzbek teacher from Xinjiang’s capital Urumqi, said she was ordered by Communist Party bosses to teach Chinese in two fetid and crowded “re-education” camps – one male and one female – for Uyghurs.

The so-called students were made to wear shackles during hours-long classes, she told the tribunal.

“The police, the guards in the camp, they didn’t see the male prisoners as human beings,” Sidik said. “They enjoyed watching them being humiliated and their suffering was for them their joy.”

Female prisoners were allegedly abused when they were taken for interrogation. “They were not only tortured but also raped, sometimes gang-raped,” Sidik said.

Forced sterilisation of Uyghur women was common and in one instance, a female prisoner died from the process, she added.

Sidik said she was also subjected to forced sterilisation before she was given a visa to visit her daughter in the Netherlands and fled China.

“The things that I have witnessed and I experienced, I cannot forget even for a day,” she said. “I am a woman myself, I have a daughter. I don’t wish anyone to suffer like that.”

The tribunal also heard from Omir Bekali, a Kazakh national with Uyghur heritage, who was arrested when visiting family in Xinjiang on a visit from Kazakhstan.

At one point in his testimony he put on chains to show the panel how he had been held in a camp for over seven months.

“For the first four days and nights, I was tortured intensely,” he said.

“I was hung from the ceiling,” Bekali explained, adding that he was beaten all over his body and on the soles of his feet.

He said his father had been killed and his brother left disabled following torture. “My father died and my sister and brother were branded terrorists,” he told the tribunal.

Rights groups say up to one million Uyghurs and people from other ethnic-Turkic minorities are detained in internment camps in Xinjiang.

The allegations heard at the tribunal are consistent with many other accounts emanating from the camps, leading the US government to declare that a genocide is underway.

But China insists they are for the educational improvement of Xinjiang residents, to deter extremism, and boost incomes.

“This pseudo tribunal has nothing to do with the law. It is embezzling the name of a ‘tribunal’ to engage in anti-China politics,” Chinese foreign ministry spokesman Wang Wenbin said Thursday.

“This so-called tribunal has also entangled a group of people whose opposition to China is their profession and livelihood,” he added, noting the backing of the World Uyghur Congress.

Dolkun Isa, the president of the Congress who was granted asylum in Germany, also addressed the panel.

“Because of my activities abroad my whole family has faced monitoring and harassment,” he said.

“I have no idea how many of my family members are in concentration camps or detention and how many are alive.”