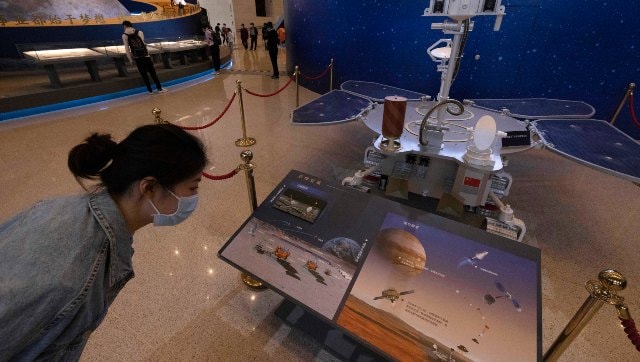 The spacecraft has six types of scientific payloads on board, which are designed to unlock more secrets of the red planet

Beijing: China has successfully landed a spacecraft on Mars after surviving “nine minutes of terror”, the official media announced on Saturday, becoming the second country in history to have a rover on the red planet.

The rover, Zhurong, named after a god of fire and war in Chinese mythology, landed at the pre-selected area in Utopia Planitia on Mars, the state-run Xinhua news agency reported.

The six-wheel solar-powered Zhurong rover weighs about 240 kilogrammes and carries six scientific instruments. It will be later deployed from the lander for a three-month mission in search of life on Mars’ surface.

Tianwen-1, consisting of an orbiter, a lander and a rover, was launched on 23 July, 2020. It was the first step in China’s planetary exploration of the solar system, with the aim of completing orbiting, landing and roving on the red planet in one mission.

The China National Space Administration (CNSA) said in a statement that its rover has successfully landed on Mars on Saturday after “nine minutes of terror”.

“The scientific research team confirmed via the telemetry signal sent by the “Zhu Rong” Mars rover that on May 15th, the Tianwen-1 Lander successfully landed in the pre-selected landing area in the Utopia Plain of southern Mars,” it said.

The successful touchdown of the Chinese spacecraft on Mars is a remarkable achievement, given the difficult nature of the task.

Only the Americans have really mastered landing on Mars until now. With this landing, China becomes the second country to put a rover on Mars.

Significantly, it will now be a space race on Mars as the Chinese spacecraft has landed three months after the successful landing of US space agency NASA’s Perseverance rover which is busy exploring the red planet’s surface with a helicopter hovering around.

Previously the US, Russia, the European Union and India have succeeded in sending a spacecraft to Mars, regarded as the most complex space mission.

Chinese President Xi Jinping has congratulated the CNSA on the successful landing of China’s first probe on Mars.

On behalf of the ruling Communist Party of China (CPC) Central Committee, the State Council and the Central Military Commission (CMC), Xi, extended warm congratulations and sincere greetings to all members who have participated in the Mars exploration mission, Tianwen-1.

The Perseverance and Zhurong explore different parts of Mars.

While the Perseverance landed in a deep crater near the planet”s equator called Jezero, the six-wheeled Zhurong rover would target Utopia Planitia, a vast terrain in the planet”s northern hemisphere.

China’s mission to Mars followed successful missions to Moon including landing a rover.

Last month China has put into orbit a core module as part of its effort to build a space station of its own to rival the ageing International Space Station, (ISS), which is a multinational collaborative project involving five participating space agencies which included NASA, (US), Roscomos (Russia), JAXA (Japan), ESA (Europe) and CSA (Canada).

The Chinese spacecraft entered the Mars orbit in February after a journey of nearly seven months through space.

Onboard Zhurong, six types of scientific payloads are designed to unlock more secrets of the red planet. A sample-return mission is also planned, a Xinhua report said.

In the early hours of Saturday, the spacecraft began to descend from its parking orbit, and the entry capsule enclosing the lander and rover separated from the orbiter.

After flying for approximately three hours, the entry capsule hurtled toward the red planet and entered the Mars atmosphere at an altitude of 125 km, initiating the riskiest phase of the whole mission.

At about 100 metres above the Martian surface, the craft hovered to identify obstacles and measured the slopes of the surface. Avoiding the obstacles, it selected a relatively flat area and descended slowly, touching down safely with its four buffer legs, the Xinhua report said.

The craft”s plummet through the Martian atmosphere, lasting about nine minutes, was extremely complicated with no ground control, and had to be performed by the spacecraft autonomously, Geng Yan, an official at the Lunar Exploration and Space Programme Center of the CNSA said.

“Each step had only one chance, and the actions were closely linked. If there had been any flaw, the landing would have failed,” said Geng.

A Xinhua commentary on the Mars mission said China is not looking to compete for leadership in space.

Mars is at the forefront of international deep space exploration. It could help humanity go deeper into space and provide first-hand data for research, such as the origin and evolution of the solar system and life, it said.

Mars is also a potential target for crewed landing missions. It can be reached using existing space capabilities, and its environment is closest to Earth in the solar system, it said.

A relatively flat region in the southern part of the Utopia Planitia was chosen for the landing and scientific research value.

Earlier research showed the landing site might be the edge of an ancient ocean or lake in the early history of Mars. Chinese scientists are looking for more evidence of water-ice, and will share the data with their international counterparts, it said.

China is a latecomer in planetary exploration. In its maiden voyage, it took a 3-in-1 approach (orbiting, landing, and roving in one mission), an innovative but complex way, hoping to push technological boundaries and test more options in deep space exploration, it added.