On the Run Review – An endless runner game I didn’t know I needed- Technology News, Technomiz

When I first played King’s new mobile release Crash Bandicoot: On the Run, I was reminded ad nauseam of Subway Surfer and Temple Run. I was, of course, thrilled about Crash in an endless runner format, because with his jumping, spinning, and sliding, he fits right into the model. You can tap to spin, swipe up to jump, swipe down to slide, and swipe sideways to switch lanes.

Crash Bandicoot: On the Run is available for free on both Android and iOS.

On the Run has new levels that you have to clear, and each level comes with its own set of challenges. Each level has boss battles that you must clear to move on to the next one.

But to enter each boss battle, on your base island, at the ‘Nitro Lab’, you will have to create bombs and serums to be able to fight the next super enemy. In the Nitro Lab, you need to create bombs and serums to be able to play the boss battles.

You won’t always have the ingredients needed for making the bombs and serums. One option is to purchase those ingredients, and the other is to explore different islands using the Map. You can collect gems, fruits and other ingredients on the islands. There are also some additional challenges on each island, but I haven’t unlocked all of those so far.

Pro tip: If you want a true endless runner experience, then you can pick new locations on the Map, which lets you run as long as you can, while picking up different ingredients on the way. The challenge runs are not as endless as you’d like and quickly come to an end with a final battle.

When you begin a run, after a few levels, you also have the option to pick from different costumes for Crash.

On the Run also has a mode named Survival Runs, which lets you team up with two other people and for a group run. Similar to Candy Crush, there is a leaderboard here as well. The more trophies you collect during the run, the higher you are on the leaderboard. However, you can only attempt a limited number of Survival Runs in a day.

Things I would change about Crash Bandicoot: On the Run

Time to time, the game requires data downloads of 300-350 MB at the time of launching the app. So, if a user does not have a Wi-Fi connection or has a limited data plan, the downloads may keep users from coming back to the game. 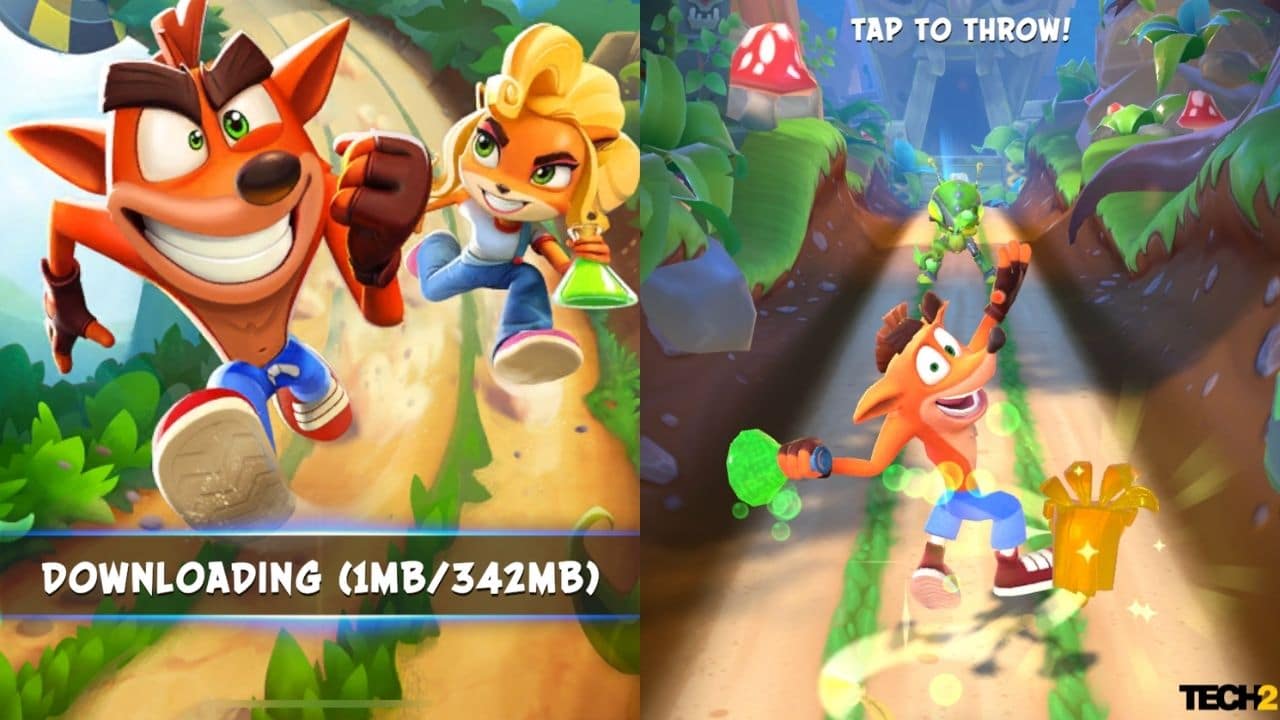 The game runs up to 342 MB of downloads each time you launch the app.

I would also make the game a little more challenging.

Crash Bandicoot: On the Run is fun no doubt, but it’s too easy. The boss battles and challenges around them should keep you on the edge of your seat, but instead, they are an easy combination of run, swipe, spin, dodge, and just tap to kill the monster. Not once was I defeated in these challenges; not because I am that good, but because the game kind of completes the challenge for you.

The game may not challenge you, but it will keep you entertained

At the end of the day, though, I still like to unwind with this game. More than a ‘run’, the game lets you leisurely potter and spin around different islands. It may not challenge you like Crash Bandicoot on a console, but the game will definitely keep you hooked.