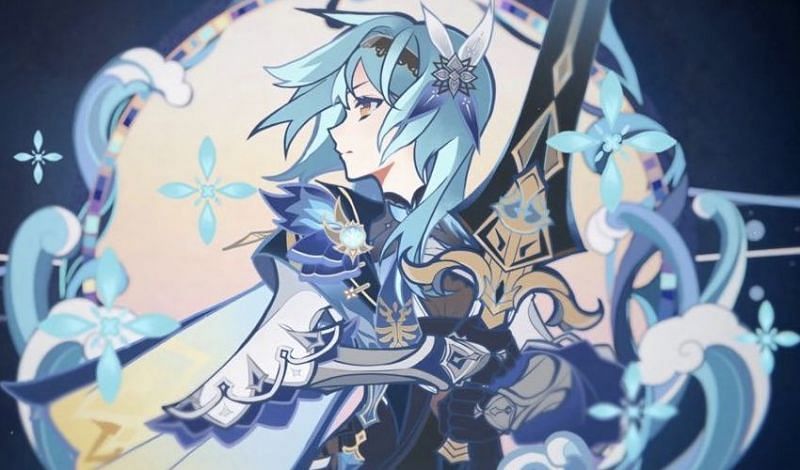 Genshin Impact leaks have revealed more information about the upcoming 5-star character, Eula. With her release date only a few days away, on May 18th, players won’t have to wait much longer to get their hands on this new Cryo Claymore character. Eula’s release will bring players back to Mondstadt for a new story quest, expanding the history of Mondstadt’s royal lineage. Players will also be able to wish on a new weapon banner, featuring Eula’s signature weapon, the Song of Broken Pines.

Also read: Genshin Impact: How to farm the best Pale Flame artifact set for Eula ahead of her official banner release on May 18

Eula’s banner in Genshin Impact has been revealed by leakers at Project Celestia, and it shows off several powerful characters for players to add to their party. Xingqiu, Xinyan and Beidou are apparently the characters appearing on Eula’s banner, making her have a more defensive oriented banner. This ties in well with her strong physical damage carry capabilities, as players will want shields to help her deal as much damage as possible.

Each of these characters also have an especially useful synergy with Eula, like Xinyan’s physical damage buffs, Xingqiu’s ability to Freeze and Beidou’s ability to create a Superconduct reaction. This Genshin Impact banner will begin on May 18th, meaning players will only have to wait around a week to wish for Eula.

Also read: Genshin Impact: What are the chances of getting Eula from the next character banner?

Eula’s weapon banner is likely to feature her signature weapon, the Song of Broken Pines, along with the Vortex Vanquisher. The 4-stars on the banner would be the Widsith, the Rainslasher, the Sacrificial Sword, the Stringless and the Dragon’s Bane. These have been leaked by a user on Twitter, and players can definitely expect the Song of Broken Pines to make an appearance.

via @tuanzhang587 it appears
Absurd base attack, effect is similar to Elegy of the End (same weapon series). Secondary is Phys DMG%. Picture is R5, so at R1 it should be:
+16% Attack. Same charm stacking as Elegy, at 4 stacks party gains 12% Attack Speed and 20% Attack for 12 sec pic.twitter.com/VEAI9sKaNK

The Song of Broken Pines will be Eula’s best slot weapon, bringing with it some insanely high base attack and an incredibly good passive, especially for Eula. This weapon’s passive goes like this: when a character strikes an enemy with a Normal or Charged attack, they gain a Sigil of Whispers, and when four Sigils are acquired, all party members will gain the “Millennial Movement: Banner-Hymn” effect, increasing Normal attack speed by 12% and Attack by another 20%.

This is amazing for Eula as it allows her to stack up on damage and take down enemies quickly. This also synergizes well with her Elemental Burst: Glacial Illumination, as she will need to deal many hits to enemies to increase the damage of the final explosion.

Read more: Ayaka banner may arrive in Genshin Impact before her birthday, according to new leak