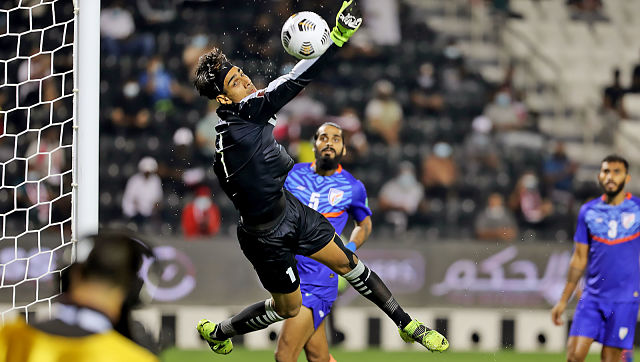 India may have suffered a bigger defeat had it not been for Sandhu, who pulled off as many as nine saves in the group E match. 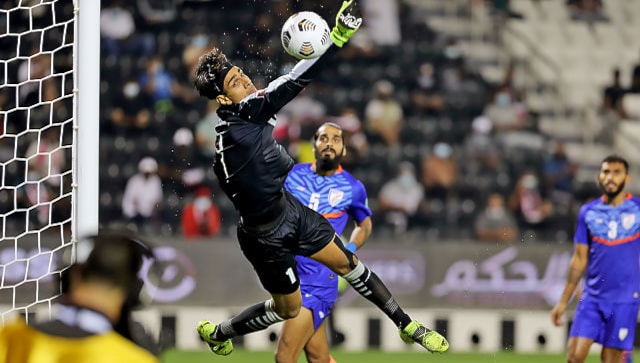 India goalkeeper Gurpreet Singh Sandhu pulls off a save against Qatar. AIFF

Doha: India must learn to capitalise on their chances when up against big teams, said a gutted Gurpreet Singh Sandhu, whose goalkeeping heroics could not prevent a 0-1 defeat to Qatar in their FIFA World Cup Qualifier.

Just 33 minutes into their joint 2022 World Cup and 2023 Asian Cup Qualifier, Asian champions Qatar were a goal and a man up in their own den, but India fought valiantly till the end to avoid losing by a bigger margin on Thursday night.

“I think we were very unfortunate with the result. Everybody in the pitch gave their everything and that’s what we need. Very very unfortunate not to get something out of this game,” he said in a video shared by All India Football Federation (AIFF) on its Twitter handle.

“I think everyone is gutted because the way we played, we deserved something out of it. But things happen in football and we now move on to the next game.”

India were down to 10 men very early after Rahul Bheke was given the marching orders for handling the ball outside the box.

?️ @GurpreetGK: “I honestly didn’t (count the number of saves), but I think it was more than last time!”

How good was that performance from ‘The Wall’? #INDQAT ⚔️ #WCQ ? #BackTheBlue ? #IndianFootball ⚽ pic.twitter.com/ouOTA2FluD

“Going a man down in the first half is always hard against a very good opposition like Qatar. I think we had our chances, we just should learn how to take them because against good opposition such chances come very rare,” Sandhu said.

India may have suffered a bigger defeat had it not been for Sandhu, who pulled off as many as nine saves in the group E match.

India had managed to play out a goal-less draw in their first leg match here in September 2019, largely due to Sandhu’s impressive show under the bar that time as well.

Asked about his saves, Sandhu said: “I honestly didn’t (count the number of saves), but I think it was more than last time.”

India will play Bangladesh in their next match on 7 June.