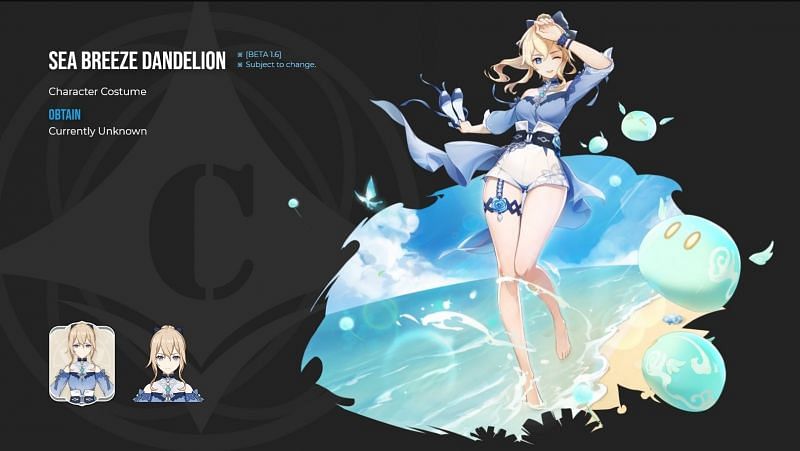 Jean and Barbara’s outfits to arrive in 1.6 update

Genshin Impact fans of Jean and Barbara can now be satisfied in knowing that their favorite characters are getting new outfits sometime in the 1.6 update.

Given their story, it is only fitting that Jean and Barbara would get a new outfit together within the same update. Fans of fanservice will greatly appreciate these two new outfits, as Jean and Barbara’s new outfits do deviate from their normal, more conservative outfits. Fortunately, it’s nothing too questionable.

The details on how to obtain the new outfits are a bit sketchy right now, but it is known that Barbara’s outfit can be obtained in an event known as Echoing Narration. Details on this event are a bit scarce right now, but it will be provided near the end of this article if Genshin Impact fans are curious about what’s been leaked thus far.

The above tweet shows off what Barbara’s skin looks like in 3D. The slow spin allows Genshin Impact gamers to see all of the details on this skin, which is nice if they’re unsure about the quality of the skin from just looking at still images.

Special thanks to u/deweweewewe for leaking the following info regarding the storyline involving Jean’s new outfit.

Jean’s outfit backstory is essentially about Jean’s own longings for romance as she too is an ordinary maiden. It even goes as far as to say that the outfit quality is “better than the thousands of costumes in any novel.” Both Barbara and Lisa played a crucial role in finding the right outfit for Jean’s wishes.

Eventually, Kaeya convinced Diluc to hire a craftsman that could tailor it. Noelle would sew the outfit with fabric taken from Amber (the same one associated with Baron Bunny). Lisa would also let them know Jean’s measurements, even going as far as to sew in the new rose ornaments.

And an appropriate quote from Jean: “This is the first time… I have had such a comfortable summer vacation.”

Special thanks to u/deweweewewe for leaking the following info regarding the storyline involving Barbara’s new outfit.

Essentially, the above photo talks about how Barbara can feel lonely at times. She wishes to act like other women of her age, doing the things women usually do in Mondstadt. Above all else, Barbara wishes to spend more time with Jean, her elder sister, because Jean is often too busy to do so normally.

Hence, Barbara has decided to go to a beach and decided to talk with Lisa to get an appropriate swimsuit for Jean. It’s a simpler story than Jean’s, but the two stories are intertwined with one another for this Genshin Impact event.

The new Genshin Impact event seems to be largely unfinished as of right now. What does seem to be apparent is that there will be six nodes where the player will do some activity. The Chinese caption next to “Test” translates to “conch story time.”

The general UI of this upcoming Genshin Impact event is pretty nice, but it isn’t yet known how all of this will work for Barbara fans. It is unknown as to what “Conch Voice” is referring to in Genshin Impact as of right now.

The final image seems to indicate that there will be a boss of some kind (looks like a raid boss at first glance, but it’s unknown what type of boss it will be). Judging by the rewards screen on this image, Barbara fans should familiarize themselves with this part of the new event if they wish to get her new skin.

The new outfits in Genshin Impact are likely going to be a bunch of many for future updates, but it should be stated that it is unknown if players will get a second chance to obtain these particular outfits at a later date.