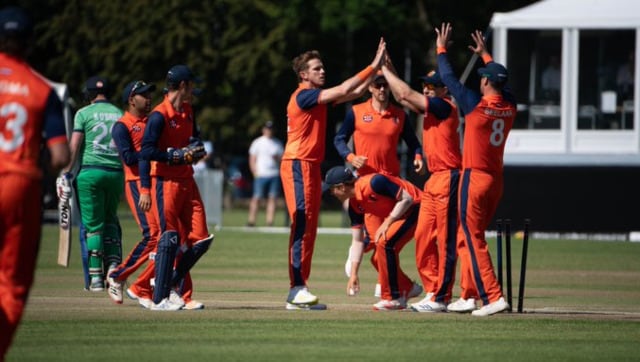 Utrecht, Netherlands: The Netherlands eased to a four-wicket win against Ireland in the deciding game of their one-day international series on Monday.

Ireland mustered only 163 and their Dutch hosts were able to knock off the required runs as they reached 166-6.

The visitors slumped to 28-3 before 58 from Harry Tector and George Dockrell’s 40 gave them hope. Netherlands left-arm seamer Fredrick Klaasen celebrates the fall of a wicket with teammates during the third ODI against Ireland. Image credit: Twitter/@ICC

Netherlands openers Stephan Myburgh and Max O’Dowd put on 66 for the first wicket in the run chase, setting the stage for their team to win with four overs to spare.

Having lost the opening game of the series, Ireland drew level with victory in the second match.

But Ireland’s second defeat was a significant blow as they go through the World Cup Super League qualifying process for the 2023 50-over showpiece in India.

For the World Cup, India and the other seven top-placed sides in the 13-team Super League will qualify automatically.

The remaining five teams will play in a 2022 qualifying event to decide the final two participants in a 10-nation World Cup.

“It’s been a difficult week for us, we’ve been really disappointed we haven’t adapted to tough conditions, but no excuses there,” Ireland captain Andrew Balbirnie said.

“There’s no excuses from us. We’ve two big series coming up at home, so we’ve got to turn it around and put it right.”