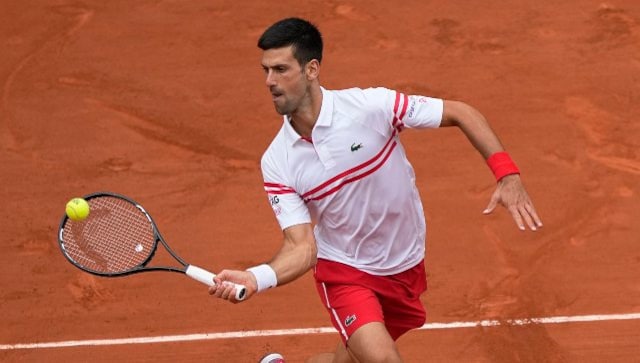 Novak Djokovic in action at the French Open. AP

Paris: Novak Djokovic survived a major scare from teenager Lorenzo Musetti on Monday to reach a 15th French Open quarter-final and stay on course to become the first man in over 50 years to win all four Grand Slams twice.

Djokovic, the 2016 champion and chasing a 19th major, was facing his earliest exit in Paris since 2009 when 19-year-old Musetti stormed through the first two sets, hitting blistering winners and finding the acutest of angles.

But the 76th-ranked Italian, making his Grand Slam debut, then went dramatically off the boil.

Where the first two sets had taken 75 and 66 minutes, Djokovic swept the third in 24 minutes and the fourth in just 17.

Musetti won only 14 points in the third and fourth sets before leaving the court for a medical time-out.

Djokovic broke for 1-0 in the decider, injuring a finger as he smashed a winner while losing his balance and falling into the clay.

Musetti gamely fought on but after being broken twice again, he called it quits.

Schwartzman will face 13-time champion Rafael Nadal or Italian teenager Jannik Sinner for a place in the last four. He was beaten by the Spaniard in last year’s semi-finals. The 28-year-old saved seven set points in the first set as he rallied from a 5-1 deficit against the 42nd-ranked Struff, who had only once before made the fourth round at a major.

Schwartzman let a 4-0 lead slip in the third set but held on to make his fifth Grand Slam quarter-final.

Kenin knocked out by Sakkari

The world number 18 needed just 68 minutes to defeat the fourth-seeded American and set up a clash with either reigning champion Iga Swiatek or Ukrainian teenager Marta Kostyuk for a place in the last four.

Coco Gauff became the youngest Grand Slam quarter-finalist in 15 years on Monday when she defeated Tunisia’s Ons Jabeur at the French Open.

Gauff, seeded 24, swept to a 53-minute 6-3, 6-1 win and takes on Barbora Krejcikova of the Czech Republic for a place in the semi-finals.

At the age of 17 years and 86 days, Gauff is the youngest woman to reach the last eight of a Slam since Nicole Vaidisova who made the quarter-finals at Roland Garros in 2006 aged 17 years and 44 days. She is also the youngest American woman to book a place in the last eight in Paris since Jennifer Capriati in 1993.

In a composed performance on Court Philippe Chatrier on Monday, the American teenager broke her fellow former junior champion three times without facing a break point herself.

“I am super happy to reach my first Grand Slam quarter-final. I played really well today,” said Gauff who has yet to drop a set at the tournament.

Gauff came into the French Open on the back of a clay-court title in Parma.

“Parma taught me how to close out matches and how to deal with pressure,” added the American who also discovered Monday that she had claimed a place on the American team for the Tokyo Olympics.

Krejcikova reached her first Grand Slam quarter-final at the French Open with a straight-sets win over 2018 runner-up and former US Open champion Sloane Stephens.

Krejcikova, ranked 33 in the world, defeated the American 6-2, 6-0 to record a ninth successive win on the tour having arrived in Paris on the back of a maiden singles title in Strasbourg.