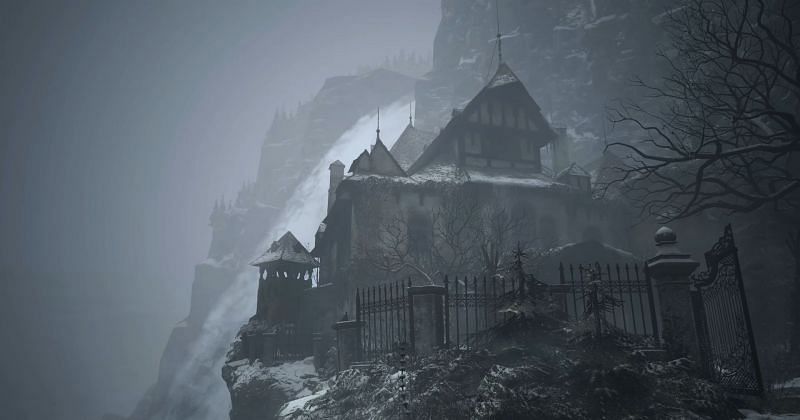 Resident Evil Village is a horror game, in which jump scares, gore, monsters constantly attacking, and psychological warfare are ever-present.

However, one of the scariest areas of the game is not what players would expect. Nestled on a haunting picturesque hillside, adjacent to a waterfall, players will soon discover House Beneviento and the many horrors that await inside.

Following Ethan defeating Lady Dimitrescu and subsequently escaping from Castle Dimitrescu, he embarks on the quest to retrieve Rose’s body parts. This is how he lands up at House Beneviento. Players who have reached this point in the game will now have to relive a more creepy rendition of “Child’s Play,” which will leave them jumping out of their chairs.

Also Read: Why is Lady Dimitrescu the most ‘simple over Resident Evil Village’ character?

Upon journeying towards House Beneviento, players will pass through a forested area, with dolls hanging from the trees, which will lead players to an old wooden suspension bridge. Upon crossing the bridge, Ethan makes his way towards the estate, following which Donna Beneviento begins to taunt Ethan with hallucinations of his dead wife, using pollen from her infected plants. The true horrors of House Beneviento are about to begin.

I’m trying to play Resident Evil Village exclusively at night, in the dark, with headphones, but as soon as I reached House Benevento I stopped feeling so brave.
…
Should I go on or try in the morning?

House Beneviento: Beware of the Dolls

As players continue along the route past the bridge and the hallucinations, they will reach an ominous grave. The entire plot gives off a ghostly glow and is littered with dolls. The tombstone reads, “Freed from the binds of flesh, she now walks the valley of death.”

After exiting the elevator and finally entering House Beneviento, the eeriness can immediately be felt. The house, much like Castle Dimitrescu, retains its vintage charm and rustic feel. After exploring the house for a bit, when Ethan goes to interact with the doll on the chair, the lights go out and all his weapons are gone as well.

Ethan is still hallucinating, and yet, he has to stay focused on the task at hand. Despite having faced the horrors of Resident Evil Biohazard, nothing can prepare him for the encounter that takes place in House Beneviento. Between solving puzzles in the dark and having to outrun a mutated overgrown monster baby, players will be left jumping out of their seats quite frequently.

After escaping this monster, and taking the elevator upstairs, players who are familiar with Chucky may have second thoughts about exploring their surroundings. Angie’s voice pierces the air and creates an eerie atmosphere that both players and Ethan must endure.

After exploring a bit, players will finally encounter Donna and Angie, and this is where those who have been traumatized by dolls growing up should probably turn the game off. Facing off Lycans and monsters is one thing, but playing hide and seek while hallucinating inside a house filled with dolls is the next level of creepy.

Following the confrontation with Angie, Ethan snaps out of the daze and realizes that he was fighting Donna Beneviento all along. After killing her, players can finally leave House Beneviento behind and continue the quest to save Rose in Resident Evil Village.

Why is House Beneviento in Resident Evil Village so terrifying?

Unlike the other locations and monsters in Resident Evil Village, House Beneviento focuses on the spiritual realm and provides a very eerie and ghostly setting within the game. Despite Lady Dimitrescu being terrifying, she doesn’t give off a ghostly aura. Ethan is also in his senses, and all players have to worry about is survival and escape.

However, the situation in House Beneviento is more psychological than physical. Players lose their guns, are forced to hide from a monster while solving puzzles, and at the end, have to face off with a doll of all things.

While the sequence is not long, given the above-mentioned factors, the psychological fear factor is immense. House Beneviento may not be the most important part of Resident Evil Village, but it is quite possibly the scariest location that’ll have to be explored in-game

Also Read: Did Resident Evil Village’s post-credit scene hint at a sequel with Rose being the protagonist?