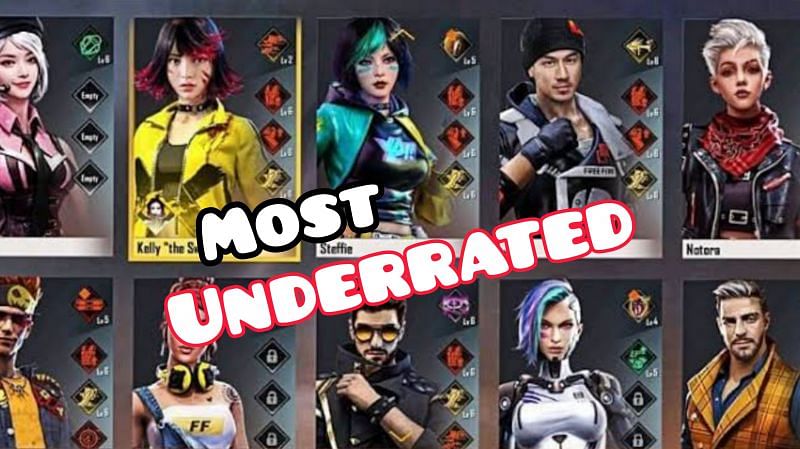 5 most underrated Free Fire characters of all time

Garena Free Fire is one of the most unique battle royale titles that has unique features like characters, pets, and more. These special additions allow the game to stand out from the crowd.

There are multiple characters in Free Fire with great potential and unique and powerful abilities that give players the advantage on the virtual battlefield.

There are many famous characters in-game that players choose, but there are also a few who are undervalued by most users.

This article lists down some of the most underrated Free Fire characters of all time who have great potential.

Note: This article lists the individual opinion of the writer. Reader’s opinion may vary.

Steffie’s active ability is called Painted Refuge. She is a pro graffiti artist and can generate graffiti that minimizes explosion damage by 15% and bullet damage by 5% for 5 seconds, at her default level 1. The CD remains for 45 seconds, and the effect does not stack.

This character’s ability improves when the ability reaches higher levels. Steffie is underrated by most Free Fire players, and only a few own her, though she can be of great worth in Ranked and Clash Squad matches.

Shani’s ability, Gear Recycle, helps restore 10 armor durability after each kill, at its most basic level. This character’s skill gets leveled up with the increase in the stages of the skill level.

Shani’s ability is not recognized by all, though it can restore armor durability, which can be valuable in ranked matches.

Joseph has a passive skill called Nutty Movement. Upon taking damage, the character’s moving and sprinting speed increases by 10 percent. The ability of this character improves when leveled up.

Joseph’s ability is most beneficial when combined with the skills of other characters in Free Fire. His quick reflexes after being hit helps players get under cover quickly.

Agility is Caroline’s passive ability, and it increases movement speed by 3 percent when holding a Shotgun. This power goes up as she reaches higher levels in the game.

Caroline’s ability to move at a faster rate while holding a Shotgun can be of great worth in the Clash Squad mode, where players extensively use this weapon for close-range fights. Her ability will allow them to have extra mobility on the ground.

Notora, a motorcycle racer, has a passive ability known as Racer’s Blessing. It restores 5 HP to all members on a motor vehicle every 4.5 seconds, at her default level. The results of the ability do not stack, and when leveled up, the skill increases.

Notora is of great significance while playing ranked squad matches. Using her, players can restore HP automatically when escaping from a fight or while taking a fight when moving in a vehicle.