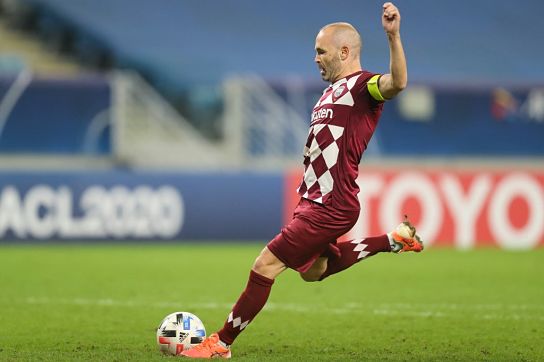 The former Barcelona maestro, who has battled back to action after a serious thigh injury, inked the two-year deal on Tuesday, his 37th birthday.

“What drives me is that I am motivated to work with Vissel Kobe to achieve big goals,” he told an online press conference.

“I want to be the one to decide when I will retire. I do not want injuries to force me into retirement.”

The World Cup-winning midfielder joined Kobe in 2018 in a deal worth a reported $30 million a year.

Iniesta, named Kobe’s captain in April 2019, was sidelined for several months after he ruptured a tendon in his right thigh last December.

Following surgery in Barcelona, he was back training in April before returning to action in the J-League this month.

Iniesta said he aims “to bring my whole body and my game intuition to the top level and be ready to fight”.

“I am happy with where I am at as far as my condition is concerned… but I am still on my way towards reaching my top condition,” he said.

After his arrival in Japan, Iniesta led Kobe to its first trophy – the Japanese Super Cup title in 2020.

“This is a sign that our project is going in the right direction. What’s important is that we will always achieve this high quality of work as a club,” he said.

Iniesta has enjoyed huge popularity in Japan, with analysts estimating he has generated more than $100 million in ticket sales and merchandising revenue.

He has appeared in TV commercials for Japanese sake and mobile phone services.

Kobe’s tech-billionaire owner, Hiroshi Mikitani, has said Iniesta’s presence in Japan has helped improve the quality of the entire J-League.