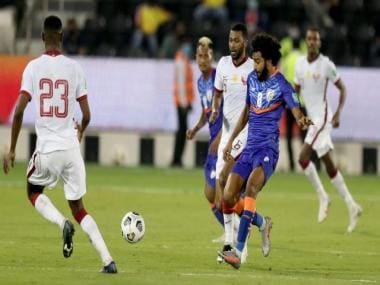 The match turned in the 17th minute when Rahul Bheke was sent off for a second bookable offence. Post the red card, Qatar barely allowed the Indians a sniff and breezed into the lead in the 33rd minute with Abdulaziz Hatem making the net ripple.

Qatar eased past India 1-0 at the Jassim Bin Hamad Stadium in Doha on Thursday. Courtesy of the victory, the hosts are now comfortably placed at the perch of the Group E table, whereas the Blue Tigers are languishing in the fourth spot, having only garnered three points from six games.

Qatar started the game brilliantly and immediately imposed their identity on the encounter. They moved the ball from side to side and drew the Indian rear-guard into uncomfortable areas. However, the hosts were unable to break through in the opening quarter of an hour.

The match turned in the 17th minute when Rahul Bheke was sent off for a second bookable offence. Post the red card, Qatar barely allowed the Indians a sniff and breezed into the lead in the 33rd minute with Abdulaziz Hatem making the net ripple.

After the break, India seemed a little more confident and tried to stamp their authority on the contest. However, clear-cut chances were hard to come by for the visitors, meaning that Qatar coasted to a routine 1-0 victory.

India began the game tentatively, with the hosts firmly in control of proceedings. The latter also dominated possession and rarely allowed the Blue Tigers any sort of time on the ball. However, despite Qatar’s supremacy, India looked largely untroubled in the opening minutes.

The visitors were content to hold a deep defensive line and restricted Qatar to shots from distance – efforts that invariably blazed over the bar or skewed wide of the posts. In fact, it wouldn’t have been a stretch to suggest that the match had meandered into a predictable yet relatively comfortable pattern for India.

Not the result we wanted, but a brave display by the 10-man #BlueTigers as we go down fighting against Qatar.

The sending off of Rahul Bheke, though, in the 17th minute, completely altered those dynamics, meaning that the Blue Tigers, who had looked nerveless up until then, suddenly resembled rabbits caught in the headlights. Though the red card was a touch harsh, Bheke certainly could’ve avoided the cautions he received. While his challenge for the first booking was casual, the handball smacked of carelessness.

Post the former Bengaluru FC player’s dismissal, the Indians suffered on their right defensive flank. Though Suresh Singh Wangjam produced an energetic display throughout, his lack of defensive awareness meant he was found wanting as Qatar’s wingers and fullbacks ran riot.

The decision to offset Bheke’s loss by deploying Suresh on the right flank also forced India to concede territory in the middle of the park. Quite often, Glan Martins found himself isolated in midfield, with Abdulaziz Hatem, in particular, enjoying plenty of freedom.

Sunil Chhetri also had to drop deep to ensure the Blue Tigers retained shape. That, though, ultimately led to India’s attacking edge being blunted significantly. From a broader perspective, it only made the contest drift further away from the Blue Tigers.

Back in November 2019, countless Indian supporters rejoiced after the Blue Tigers secured a momentous stalemate against Qatar. Newspapers even suggested that it was the giant leap that Indian football required.

Since then, though, positives have been at a premium, with insipid draws against Afghanistan and Bangladesh being succeeded by a 6-0 humbling against the UAE.

On Thursday, India weren’t any better. For large swathes of the game, they were miles away (both literally and metaphorically) from Qatar and perhaps flattered themselves courtesy of the scoreline.

Even before Rahul Bheke was sent off, Qatar looked a much more coherent unit as they sprayed passes all over the pitch. Once the defender was issued his marching orders, the gulf in quality became even more apparent.

On numerous occasions, India were quite sluggish, meaning that Qatar recycled possession efficiently. In turn, that forced the Indians to retreat deeper and exert a lot more effort in chasing the ball.

️ @GurpreetGK: “I honestly didn’t (count the number of saves), but I think it was more than last time!”

How good was that performance from ‘The Wall’? #INDQAT ⚔️ #WCQ #BackTheBlue #IndianFootball ⚽ pic.twitter.com/ouOTA2FluD

The Indians were also guilty of not appreciating spaces throughout the encounter. Qatar, on the other hand, preyed on any openings the Blue Tigers left and subsequently, made merry.

To place things into context, there were plenty of instances when the Indian defence and midfield stood static as Qatar passed and moved their way into promising positions. The hosts also maintained possession excellently and rarely gave the ball away, even as the Indians incessantly kept doing so.

In addition, India never looked comfortable when venturing forward. Though those situations were sporadic, the Blue Tigers failed to transfer pressure onto their opposition. In simpler terms, the visitors lacked the requisite craft, expertise, and guile and to open up Qatar’s defence, and invariably rushed their final passes.

Back in November 2019, there was palpable optimism post the drawn game against Qatar. Yet, the tussle in June 2021 has only proved that India remain a lifetime away from a side of Qatar’s ilk.

And, while the result may suggest otherwise, the defeat was as comprehensive a reality check as India might ever get.

Igor Stimac’s selections leave a lot to be desired

Over the past few months, speculation has been rife about Igor Stimac’s future. Recently, he was handed an extension to shepherd the Blue Tigers through to September 2021. However, the scrutiny around his job has not gone away, with plenty of people opining that Stimac might’ve run his race.

Thus, the match against Qatar represented the ideal opportunity for the Croatian to turn things around and hint that he remains the ideal choice to realise India’s vast footballing potential. Unfortunately, though, nothing of the sort materialised, with Stimac shooting himself in the foot with his team selections.

The Croatian opted for a 3-5-2 system initially, with Pritam Kotal, Sandesh Jhingan, and Subhasish Bose acting as the three central defenders. Rahul Bheke was picked to man the right flank, whereas Ashique Kuruniyan was tasked with containing Qatar’s wingers on the other wing.

A major problem of the system though, was that neither of the players seemed accustomed to playing it together.

Pritam Kotal, despite the defensive traits he brings to the fore, isn’t great against pacy forwards. The ATK Mohun Bagan defender’s deficiencies were mercilessly exploited as Qatar’s forwards kept running beyond him. The first goal also came about after Pritam failed to track his runner, with the latter then finding Abdulaziz inside the box.

Subhasish Bose, on the other hand, isn’t as equipped to function as a left-sided centre-back, thereby making his inclusion startling. In fact, even during his stints at ATK Mohun Bagan and Mumbai City FC, he has always looked vulnerable to strikers/wingers finding space behind him.

Rahul Bheke is also not suited to play as a wing-back. While he has operated as a full-back previously (both for Bengaluru FC and India), his lack of pace has almost always been called into question. Ashique Kuruniyan, meanwhile, isn’t a natural defender and it was perhaps naïve of Stimac to expect the winger to hold his own against Qatar’s wide players.

The only anomaly in the defensive line was Sandesh Jhingan, who got himself in the right place at the right times. He effected a considerable number of blocks and clearances, ensuring that India kept the Qataris at bay in the second half.

Apart from the decisions before the match, Igor Stimac also decided to replace Sunil Chhetri at the break – something that negated the already minimal attacking threat India carried.

Despite these questionable calls, India somehow managed to limit the damage and only succumbed to a 1-0 defeat. That could be attributed to Qatar’s wastefulness and the immense display Gurpreet Singh Sandhu produced.

A bittersweet reunion as we couldn’t give you the result we all wanted!

But, we’ll be back stronger!

Though there might be a temptation to label this game as another where Stimac’s charges came up with a heroic outing, the bare fact remains that the Croatian got himself into a pickle, even before kick-off.

For much of his tenure, Stimac has maintained that he wants his players to play a fearless brand of football. In turn, those refreshing ideas have bought him a little time, meaning that a majority of Indian football fans have overlooked the string of indifferent matches.

Now, though, time might just be running out for the Croatian. Not just because India have not registered the results expected of them, but also because Stimac seems unclear on his best starting eleven. That he has been at the helm for over two years, only highlights the enormity of his predicament and that of the Indian national team.