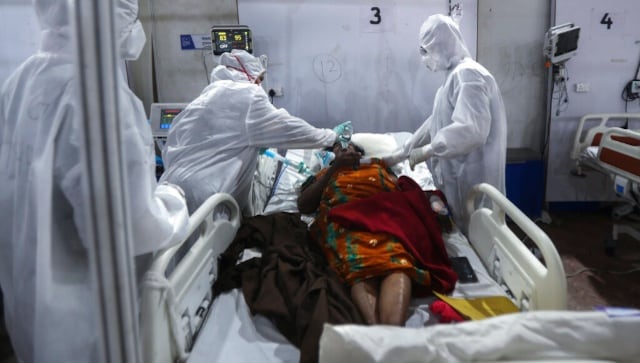 infections have reached a tipping point in Kashmir as the authorities continue to allow travellers to the Valley and have restricted the number of tests despite medical experts stating that the number of positive cases was being significantly underreported.

The medical facilities across the region are overwhelmed which has now forced the health authorities to issue a directive that the real-time reverse transcription-polymerase chain reaction (RT-PCR) tests shouldn’t be carried out for asymptomatic COVID patients and neither the rapid antigen tests (RAT) nor RT-PCR tests should be done for COVID patients discharged from the hospitals.

“The molecular (RT-PCR) testing laboratories are being overwhelmed due to huge testing load,” read an order issued by a senior official of the COVID-19

Control Room in Kashmir, asking the chief medical officers (CMOs) not to go for “unmindful” testing.

at the time of discharge from the hospital so that the disease doesn’t spread. Medical experts said that based on the test reports doctors would also advise asymptomatic COVID-19

positive attendants to go for self-isolation.

Health department spokesperson, Dr Mir Mushtaq, however, said that the new guidelines on the COVID-19

patients as they wait for the tests”.

in Jammu, as well as Kashmir regions, was due to the prevalence of both the double mutant variant of India and mutant virus strain of the UK. In Kashmir, however, not all travellers are being tested for COVID-19

According to officials while a limited number of COVID-19

positive cases were tested for genome sequencing at the Srinagar airport, those travelling by road were not tested. Both the chief medical officers of Anantanga and Kulgam, who test travellers to Kashmir said that they were not undertaking genome sequencing of those who visit Srinagar by travelling on the Jammu-Srinagar highway.

A senior doctor at Sher-i-Kashmir Institute of Medical Sciences (SKIMS) Soura, said that they were only “testing representative samples for genome sequencing” at the Srinagar airport and the tests for a large number of cases were pending with the National Centre for Disease Control (NCDC).

in Kashmir which they said could further flare up. Kashmir’s top gastroenterologist, Dr MS Khuroo, said that the numbers could nearly double from the present count by the last week of May if the lockdown was relaxed.

Khuroo, who heads a COVID-19

advisory panel of the government, said that the lockdown has been effective, but added that numbers could touch a daily count of 1,00 deaths and 10,000 positive cases if the “people don’t follow the SOPs and adhere to the lockdown measures”.

Khuroo said that the actual number of COVID-19

The high rise in the numbers is being attributed to the promotion of gatherings through sports events and tourism promotion before the authorities imposed a lockdown here last month. A series of orders by the authorities have also resulted in chaos.

After people thronged markets in Srinagar city on Wednesday ahead of Eid-ul-Fitr resulting in traffic jams, the district administration withdrew its order to allow the functioning of partially permissible activities of retail and wholesale grocery, bakery as well as meat shops and vendors selling vegetables and fruits from 8 am to 12 pm.

On 2 May, while the Jammu and Kashmir’s State Executive Committee which has Chief Secretary BVR Subrahmanyam, as the chairperson, in its COVID-19

guidelines stated that half of the shops could open on alternate days, the department of information and public relations later clarified on the same day that the guidelines were for long term restrictions and the total lockdown will remain in force across the UT.

On the ground however it was the local police personnel who decide on what can be permitted. Several incidents of essential service workers including medical staff and the power development department (PDD) employees being barred from attending duties were reported in the last week.

Chadoora sub-divisional magistrate Noorul Hamid on Tuesday directed the local police authorities to ensure that the PDD employees should not be stopped from travelling after it came to his notice that “an employee” was assaulted by a police party.

On Monday, Kashmir Press Club condemned the “beating of a journalist” Saqib Majeed in Srinagar who it said, “was roughed up by cops while doing his job” along Dal Lake in Srinagar. Doctors took a strong note of the assault on a medic in the southern Kashmir area of Shopian by the police.

Following these incidents, the police however said in a statement on Thursday that to “ensure hassle-free movement of the doctors and para-medical staff, a special helpline has been established and doctors and paramedics are advised to inform along with their location, in case they have been stopped en-route to their place of duties. Keeping in view the prevailing situation, the healthcare workers are also requested to cooperate with the Law Enforcement agencies and not to visit unnecessarily beyond the place of duty or stay.”