Medvedev, who had never won a match at Roland Garros before this year, defeated Cristian Garin of Chile 6-2, 6-1, 7-5 in his last 16 tie. 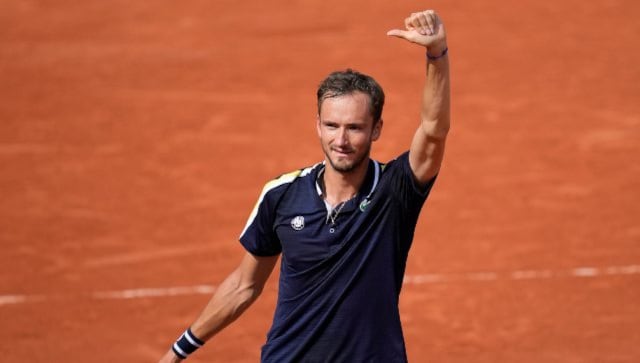 Paris: Second seed Daniil Medvedev of Russia made the French Open quarter-finals for the first time on Sunday and will tackle Greek fifth seed Stefanos Tsitsipas for a place in the last four.

Medvedev, who had never won a match at Roland Garros before this year, defeated Cristian Garin of Chile 6-2, 6-1, 7-5 in his last 16 tie. The 23-year-old, a former junior champion at Roland Garros, is this season’s best-performing clay court player.

She now has 17 wins against just two losses on the surface, a run that includes the Belgrade clay court title on the eve of the French Open.

Anastasia Pavlyuchenkova came from a set down to beat Victoria Azarenka 5-7, 6-3, 6-2 and reach her first French Open quarter-final since 2011.

The Russian 31st seed broke former world number one Azarenka eight times to advance to her seventh Grand Slam quarter-final. She will play Serena Williams or Elena Rybakina for a place in the last four. “It’s a surprise for me to be here. I fought for each ball and each point and played very well.”

Pavlyuchenkova, who lost to eventual runner-up Francesca Schiavone here a decade ago, matched her best run at a major.

She has made the last eight at all four Slams, including three of the past five Australian Opens.

She knocked out Aryna Sabalenka, the highest-ranked player left in the draw, in the previous round to avenge a semi-final loss to the Belarusian in Madrid.

Tamara Zidansek became the first woman from Slovenia to reach the quarter-finals of a Grand Slam when she defeated Romania’s Sorana Cirstea.

The 23-year-old had never previously got beyond the second round of a Grand Slam.

However, she illustrated her potential by knocking out sixth-seeded former US Open winner Bianca Andreescu in the first round where she had twice been just two points from defeat.

“For me, the key was to start to really believe that I can beat the top players, to believe that I am better than them and that I belong there,” said the Slovenian.

Zidansek, a keen snowboarder in her winter off-time, finished runner-up on clay in Bogota in April.

However, before seeing off Andreescu in the first round in Paris, she had never defeated a top 10 player.

In a women’s draw thrown wide open by the early exits of top three seeds Ashleigh Barty, Naomi Osaka and Aryna Sabalenka, the opportunities exist for a shock champion to emerge.