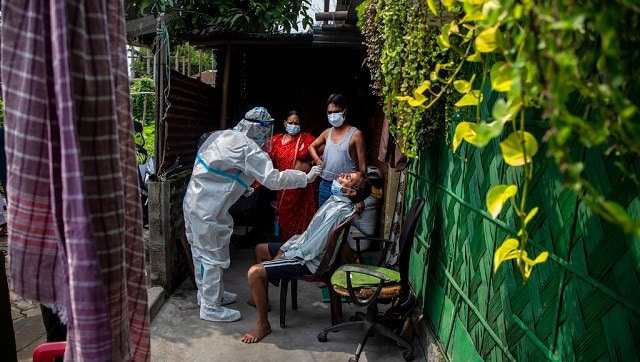 Meanwhile, the Assam government asked all its employees who have received two doses of the COVID-19 vaccine to join offices from Monday

cases on Sunday, the lowest after 71 days, Delhi chief minister Arvind Kejriwal announced that restaurants with 50 percent capacity, weekly markets and religious places will re-open in the National Capital from Monday. Tamil Nadu and the Union Territory of Jammu and Kashmir further eased curbs in some districts.

Tamil Nadu chief minister MK Stalin announced more relaxations, which include permission for tea shops to reopen from 14 June, in as many as 27 districts.

The Jammu and Kashmir administration said government and private offices can function without any restrictions, subject to strict adherence to COVID-appropriate behaviour, in eight districts showing significant improvement in the COVID-19

Meanwhile, the Assam government asked all its fully vaccinated employees to join offices from Monday even as a partial lockdown across the state will be in force.

The announcements come as the positivity rate in India dropped to 4.25 percent and the active coronavirus

Active cases declined by 54,531 and comprise 3.49 percent of the total infections. The number of people who have recuperated from the disease surged to 2,80,43 and the recovery rate improved to 95.26 percent.

Recoveries continue to outnumber daily new cases for the 31st consecutive day. Also, 19,20,477 tests were conducted on Saturday taking the total cumulative tests conducted so far in the country to 37,62,32,162 while the daily positivity rate further dropped to 4.25 percent .

It has been less than 10 percent for 20 consecutive days, the ministry said, adding the weekly positivity rate fell below 5 percent and was recorded 4.74 percent.

In an online press briefing, Delhi chief minister Arvind Kejriwal said, “All activities, except certain prohibited ones, will be allowed from 5 am on Monday. There are also certain restricted or partly allowed activities announced last week that will continue.”

Kejriwal said markets, malls and market complexes, allowed to reopen on odd-even basis, will now open on all days, from 10 am to 8 pm. Only one weekly market per municipal zone per day will be allowed, he said.

The religious places in the city will also be allowed to reopen from Monday, but visitors will not be allowed, Kejriwal said.

“We will watch the relaxation allowed to reopen markets and restaurants during the next week. If Covid cases do not increase, we will continue the relaxation, but if cases increase, we will have to bring back the restrictions.I, therefore, appeal to all market associations and others to prevent crowding and ensure social distancing and other precautions,” the chief minister said.

Kerjiwal emphasised that with declining number of coronavirus

cases, the concern now is to bring back Delhi’s economy on track and prepare on a war footing for an anticipated third wave of the infection.

The partly allowed activities announced last week and earlier, including opening of government and private offices with 50 percent staff, marriages at home or in the court, operation of Delhi Metro trains and public transport buses with 50 percent seating capacity, permission for a gathering of 20 persons during funerals, running of autos, e-rickshaws and other last-mile vehicles, will continue up to June 21 morning, it added.

All social, political, sports, entertainment, academic, cultural/religious, festival-related and other gatherings and congregations, stadia, sports complexes barring those used for training or any national or international event, business to business exhibitions, are also prohibited.

Restaurants are allowed to operate with up to 50 percent of the seating capacity in the city and their owners will be responsible for strict adherence to the prescribed standard operating procedure and government guidelines, including those for COVID-appropriate behaviour, the DDMA order stated.

In Tamil Nadu, Stalin in a statement said tea shops in 27 districts can function from 6 am to 5 pm and only takeaway services are permitted. “Sweet and savoury shops are also permitted to be open from 8 am till 2 pm and only parcel services are allowed.” Restaurants and bakeries have already been allowed to function.

To help people avail a host of government services like getting certificates for various purposes, e-service centres would also operate from Monday, the chief minister said. Offices of building construction firms are also allowed to work with a 50 percent workforce, he added.

Construction work has also been allowed.

With the exception of 11 districts, seven in western and four in Cauvery delta regions respectively, the fresh relaxations would be applicable in the rest of 27 districts including Chennai and other nearby districts.

Also, the Jammu and Kashmir administration decided to grant relaxations in Shopian, Kulgam, Ganderbal and Bandipora in Kashmir division and Poonch, Reasi, Ramban and Doda in Jammu division. The decision was taken at a meeting that focussed on total weekly new cases (per million), positivity rate, bed occupancy, case fatality rate and vaccination coverage of the targeted population, an official order said.

The order said government and private offices can function in the eight districts without any restrictions subject to strict adherence to COVID-appropriate behaviour, while barber shops, salons and parlors are permitted to open on all days of a week, except on Saturday and Sundays.

Similarly, standalone shops, outdoor bazaars and shopping complexes are also permitted to open on all days except the weekends, the order said.

“Some districts need intense efforts to reach desired levels. As such, there is a need to continue with existing COVID containment measures in these districts,” the order stated. It directed the district magistrates to strictly ensure that there is full compliance to COVID-appropriate behaviour and defaulters are firmly dealt with under relevant sections of the Disaster Management Act and the Indian Penal Code.

The order said the wholesale trade of liquor would continue to be permitted to operate on five days in a week in the entire Union Territory, where a weekend curfew remains in force on Saturday and Sunday.

The Jammu and Kashmir administration started the unlock process in the Union Territory on 31 May.

In Assam, General Administration Department Commissioner and Secretary MS Manivannan issued an order stating: “In order to ensure smooth functioning of government offices, all the employees of Government of Assam who have received both the doses of COVID-19

vaccine are hereby directed to attend office from 14/06/2021 regularly.”

The order further said that the eligible employees should follow all Covid related protocols issued by the government while joining work.

Manivannan said the decision has been taken for the smooth functioning of government offices.

‘All help to be given to children orphaned by COVID-19

In Madhya Pradesh, Chief Minister Shivraj Singh Chouhan said the government was fully committed to taking care of children who had lost their earning parent or had been orphaned due to COVID-19

“The state government, along with civil society, will provide education, refuge, food and other needs to orphaned kids. A scheme on this is going to come up shortly. We can’t leave such children in the lurch,” Chouhan said while addressing district crisis management committees online.

Chouhan had recently announced a scheme under which such children would get several benefits, including financial assistance of Rs 5,000 per month. A state government official said a scheme for children orphaned by COVID-19

came into effect from 21 May and covers the period from 1 May to 30 June.

Odisha to include children above 6 years in sero-survey

Meanwhile,  news agency PTI reported that the Odisha government has decided to include those above six years in the ensuing fourth sero-survey, anticipating a possible third wave of COVID-19

and its effects on children,

The sero-survey will be conducted from 17 June in three districts — Ganjam, Rayagadda and Koraput, said Sanghamitra Pati, director of the Regional Medical Research Centre (RMRC), a unit of ICMR.

“For the first time, children above 6 years will be brought under the ambit of this survey,” Pati said, adding, the exercise will be completed in four days. The sero-survey will be carried out in 70 districts across India, she said.

Health experts said the outcome of the sero-survey will help the state government prepare strategies to face another wave of the pandemic.

The institute has decided to take a sample size of 2,500 Chandigarh-based people below 18 years of age for the survey and the sampling will be done from the city, rural and slum areas, he had said.