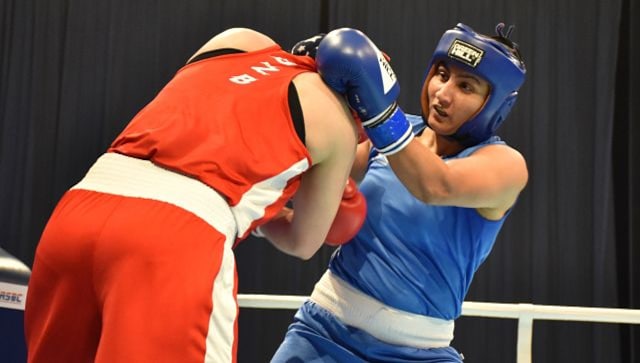 Pooja Rani (75 kg) in action during her 5-0 win against Mavluda Movlonova of Uzbekistan as she secured first gold medal for India at ASBC Asian Championships in Dubai. BFI

The Indian women’s boxing team will be returning with one gold, three silver and six bronze medals from the event in Dubai, ensuring that all 10 weight categories featured an Indian medallist.

Seven of these medals were secured on the day of draws itself thanks to the small size of competition.

“I am very satisfied with the performance overall. Yes, we could have got more gold medals but given that we hardly got to train before the championships, I cannot complain,” Ali Qamar told PTI.

“All the silver-winners lost very close bouts and gave it their best. As a coach there is nothing more I can ask for,” he added.

Ali Qamar was referring to the 2-3 losses endured by the Olympic-bound MC Mary Kom (51kg), and tournament debutants Lalbuatsaihi (64kg) and Anupama (81+kg). All three of them fought draining contests and fell short only marginally.

Interestingly the championship bout was her first and only outing of the competition as she got a bye into the semifinals and a walkover into the finals.

The tournament proper might not have been all that taxing but women boxers had a tough time preparing for the event, which was to be held in India originally but shifted to Dubai because of the escalating COVID-19

Training was subsequently organised in Pune’s Army Sports Institute a couple of weeks before the team’s departure for Dubai and only a handful of Olympic-bound boxers, including Mary Kom, turned up for it.

“Mary had a very good tournament overall. She lost in the final but in my view the final round had been won by her but that’s sport, you can’t do much. With limited training, her performance is really praiseworthy,” said Ali Qamar, who also became a 3 star coach by completing his course during the tournament.

Among the Olympic-bound group Lovlina Borgohain (69kg) and Simranjit Kaur (60kg) lost in their opening bouts.

Kaur had entered the competition days after recovering from COVID-19

which had come in the way of her resuming training in Pune.

The national camp will now stay in Pune once the team comes back from Dubai.

“Training will be held in Pune only till Olympics. There is no other plan. It is an excellent facility,” Ali Qamar said.

Pooja had been training at Bengaluru’s Inspire Institute of Sports (IIS) before the tournament. It remains to be seen whether she heads back there or joins the others in Pune.

“I am very happy because this tournament has also helped us prepare for the Olympics. It was a crucial tournament for us,” said Pooja, whose tally of medals at the event has now gone up to four.

Apart from the successive gold medals, she had won a silver in 2012 and a bronze in the 2015 edition of the showpiece.

It has been quite a journey for the Bhiwani-boxer, who battled injuries and “a feeling of being finished” between 2016 and 2018.

The setbacks of that phase included a burnt hand, and a career-threatening shoulder problem for which she was recommended surgery.

The 30-year-old decided against it and relied on physiotherapy to fight her way back to the Asian gold in 2019.

She didn’t look back after that and qualified for her maiden Olympic appearance last year.