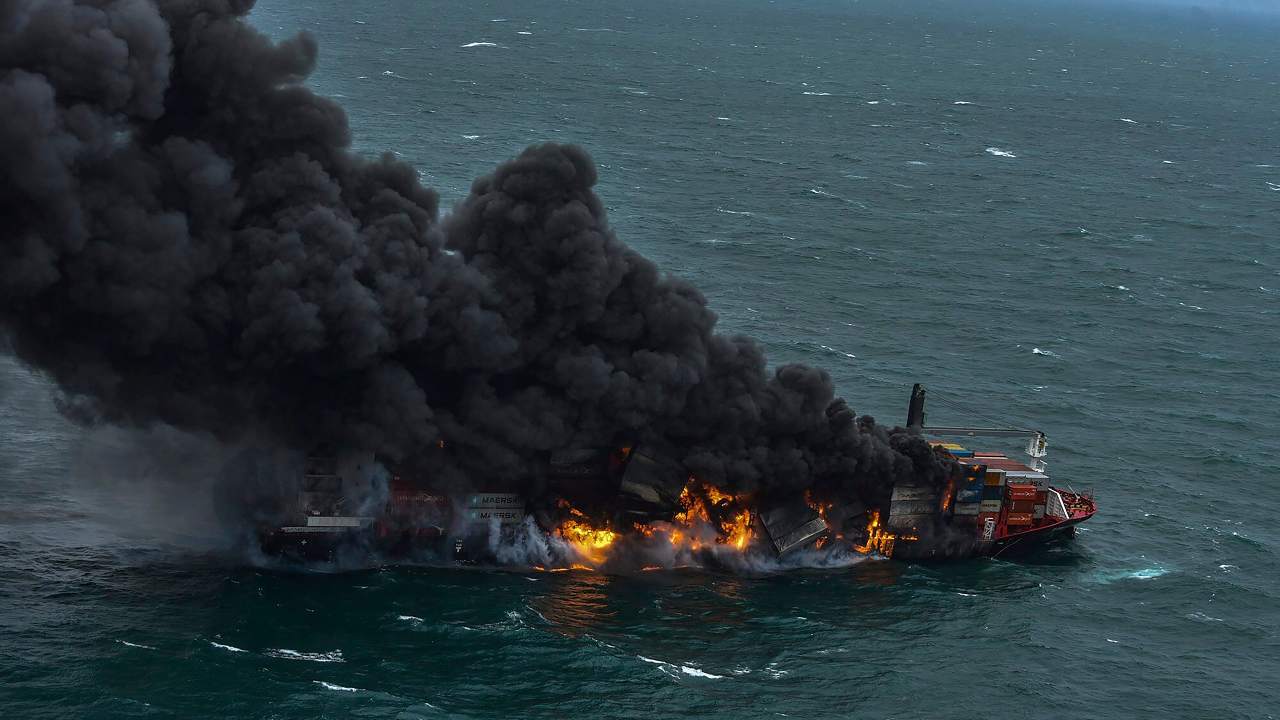 Sri Lanka faces an unprecedented pollution crisis as waves of plastic waste from a burning container ship hit the coast and threaten to devastate the local environment, a top environment official warned Saturday. Thousands of navy ratings using mechanical diggers scooped tonnes of tiny plastic granules on the beaches that had come from the Singapore-registered MV X-Press Pearl that has been smouldering on the horizon for ten days. Sri Lanka’s Marine Protection Authority (MEPA) said the microplastic pollution could cause years of ecological damage to the Indian Ocean island.

“This is probably the worst beach pollution in our history,” MEPA chairman Dharshani Lahandapura said.

Fishing has been banned along an 80-kilometre stretch of coast near the ship that has been burning for 10 days despite an international firefighting operation.

Orange-coloured plastic booms were set up in case oil leaks from the crippled ship reaches the Negombo lagoon that is famed for its crabs and jumbo prawns.

Thousands of small boats were beached at Negombo Saturday because of the fishing ban.

No end in sight

Naval rating Manjula Dulanjala said his team had almost cleared the beach on Friday evening, but were shocked to find it covered again the following morning.

“This is like the coronavirus. No end in sight. We removed all the plastic yesterday, only to see more of it dumped by the waves overnight,” he said.

The pellets and waste were packed into green and white polythene sacks and taken away by trucks.

An officer leading another team said that in certain parts of the beach the microplastics and charred debris was 60 centimetres (two feet) deep.

The December 2004 Asian tsunami devastated much of the island’s coastline and killed an estimated 31,000 people, but only damaged coastal infrastructure.

Roman Catholic priest Sujeewa Athukorale said most of his parishioners were fishermen who risked becoming destitute.

“Their immediate need is to be allowed to go back to the sea,” he said.

“There are 4,500 fishing families in my parish alone.”

Fisherman Lakshan Fernando, 30, said people feared the plastic waste could destroy mangroves as well as the corals where fish breed in the shallow water.

Sri Lanka is facing one of the biggest #marinepollution events in its history because of the #xpresspearl fire. The entire Western Coastal Belt of the country has now been polluted with chemicals, plastic pellets and an oil spill, with possible acid rain on the way. #lka pic.twitter.com/MYvcYQWUvP

“No one is able to say how long we will have the adverse effects of this pollution,” Fernando told AFP.

“It could take a few years or a few decades, but in the meantime what about our livelihoods?”

An oil leak from the vessel, said to be carrying 278 tonnes of bunker oil and 50 tonnes of gasoil, would increase the risk of devastation.

Much of the ship’s cargo, including 25 tonnes of nitric acid, sodium hydroxide, lubricants and other chemicals, appeared to have been destroyed in the fire, officials said.

The X-Press Pearl caught fire as it waited to enter Colombo harbour and remains anchored just outside the port.

The fire on the New Diamond took more than a week to put out and left a 40-kilometre (25-mile) long oil spill. Sri Lanka has demanded the owners pay $17 million for the clean-up.