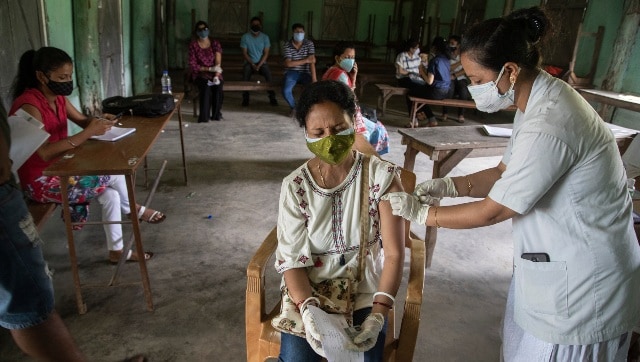 The study included 63 people who got breakthrough infections; of which 36 patients received two doses, while 27 had received one dose of vaccine New Delhi: A preliminary study conducted by the All India Institute of Medical Science (AIIMS) Delhi claimed that the presence of COVID-19

Delta variant (B1.617.2) is predominantly found even after getting a single dose or both doses of COVID-19

The study included 63 people who got breakthrough infections; of which 36 patients received two doses, while 27 had received one dose of vaccine.

“SARS-CoV-2 lineages could be assigned for a total of 36 (57.1 percent) samples, 19 (52.8 percent) in patients who completed both doses and 17 (47.2 percent) in patients who completed only a single dose. B.1.617.2 was found to be the predominant lineage with 23 samples (63.9 percent) out of which 12 were fully vaccinated and 11 in partially vaccinated groups. 4 (11.1 percent) and 1 (2.8 percent) samples were assigned the lineages B.1.617.1 and B.1.1.7 respectively. The B.1.617.2 lineage was first described in India and associated with increased transmissibility as well as immune escape and has grown to become one of the predominant lineages in India,” the AIIMS study said.

Ten patients received Covishield while 53 received Covaxin, of which 41 were males and 22 were females.

The patients had a mean age of 37 (21-92), of which 41 were males and 22 were females. None of the patients had any comorbidities which could act as a predisposing factor for breakthrough infections.

The report further stated that there are no reports of deaths in a sample size of 63 people, even though almost all cases reported high-grade unremitting fever for 5-7 days.

“Viral load at the time of diagnosis was high in all the patients irrespective of vaccination status or type of vaccine received. The initial course of disease with high-grade non-remitting fever lasted for five to seven days in the vaccinated group, similar to the clinical presentation in unvaccinated patients. During the subsequent course of illness, neither disease worsening (stable biomarkers) nor mortality was reported in the present group, confirming the previous observations,” as per the study.

Of the breakthrough infection cases analysed, 10 patients (8 with double doses of vaccine and 2 with single vaccine dose) additionally had total Immunoglobulin G (IgG) antibodies assessed, of which 6 patients had IgG antibodies a month before the infection, while 4 had antibodies after the disease episode.

The patients included health care workers (24, 13 of which were from the same hospital) and close analysis of the genomic sequences suggests that the samples clustered separately with origins closely clustering with lineages from different states, suggesting the disease transmission happened most likely from different and independent sources.

cases in the state of Delhi, the variants of concern B.1.617.2 and B.1.1.7 comprised the majority, but the proportions were not significantly different in comparison with the population prevalence of the variants during this period with high community transmission.”

Mortality due to COVID-19

was ascribed to two percent cases (primarily older population, average age-82 years). The study has not been peer-reviewed yet.