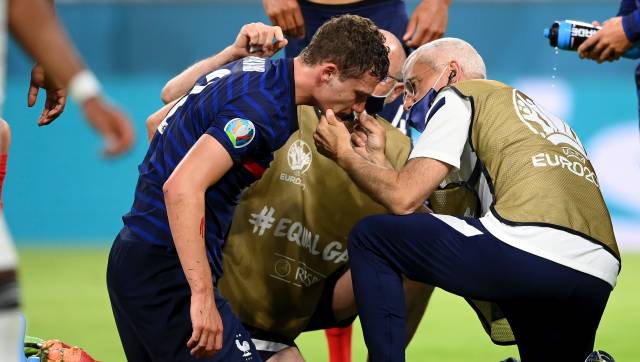 Pavard revealed he briefly lost consciousness during the world champions’ 1-0 victory on Tuesday, but still managed to finish the game. 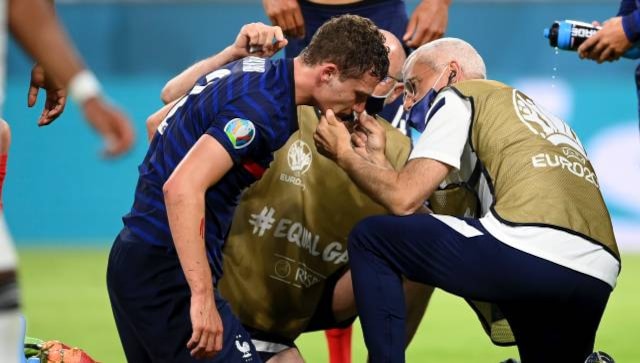 France’s Benjamin Pavard needed assistance after a collision in the game against Germany. AP

Munich: The global footballers’ union FIFPro on Wednesday asked UEFA why France defender Benjamin Pavard played on after being “knocked out” during his team’s Euro 2020 win over Germany.

Pavard revealed he briefly lost consciousness during the world champions’ 1-0 victory on Tuesday, but still managed to finish the game.

“FIFPro is in touch with UEFA to find out why the Concussion Charter was not applied and subsequently Benjamin Pavard was not removed from the field of play,” FIFPro said in a statement on Twitter.

Les Bleus made a winning start at the European Championship as a first-half own goal by Germany defender Mats Hummels separated the sides in Munich.

However, France’s Bayern Munich defender Pavard was poleaxed in the second half in a collision with Germany left-back Robin Gosens and needed treatment on the pitch.

The 25-year-old played the full 90 minutes and it remains to be seen whether he features in France’s next Group F game, against Hungary on Saturday.

“The doctors arrived and they saw he was perfectly aware of the situation and that he was fit,” said France centre-back Raphael Varane.

All 24 teams at the European Championship have signed a “concussion charter” designed to improve the care of players during games.

The charter says that players should be taken immediately off the pitch if suspected of having suffered concussion.

A UEFA spokesman told AFP that European football’s governing body was “in contact” with the French football federation about the incident.

Player safety fears are high on the agenda after Denmark midfielder Christian Eriksen suffered a cardiac arrest during his country’s opening defeat to Finland.

The Inter Milan player is recovering in hospital after his ordeal.