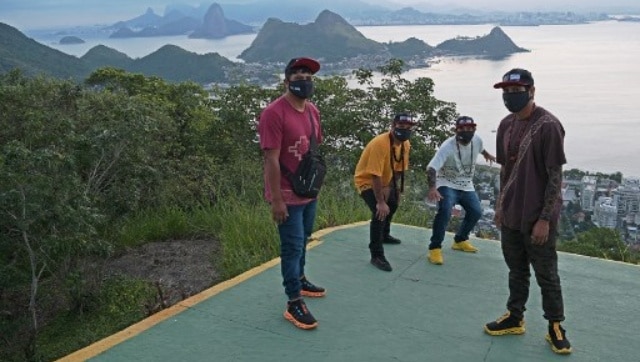 People say our lyrics are harsh, but that’s our reality, one of the rap group’s members said. Formed in 2009 by two sets of brothers — Clemerson Batista and Bruno Veron, and Kelvin and Charles Peixoto — Bro MC’s are recognised as the first indigenous rap group in Brazil, a country whose 900,000 native inhabitants have endured a long history of mistreatment and violence stretching into the present day.

“The earth is red with the blood of warriors massacred for taking a stand, killed by big-shot ranchers and hired guns for defending their land,” they rap on one well-known track, ‘Terra Vermelha‘ (Red Earth).

The song neatly summarises the centuries of land conflict that have devastated Brazil’s indigenous peoples.

Those lyrics are loosely translated from the original Portuguese. The brothers also rap in Guarani, the indigenous language they speak at home. “People say our lyrics are harsh, but that’s our reality,” said Clemerson, 29.

The reservation was created in 1917 for members of the Guarani-Kaiowa people, an episode filled with trauma that the brothers say is still fresh.

“The government displaced the indigenous people and put them on unproductive land,” Clemerson told AFP during a recent concert date in Rio de Janeiro. “When they tried to go back to their ‘Tekoha‘ (sacred land), where they were born, they found it fenced off, with huge corn and soybean plantations on it.”

Conflict over the land is still smoldering.

The Guarani-Kaiowa say farmers raze the homes of indigenous people they accuse of encroaching on their land, using a large tractor transformed into a sort of tank.

They call the tractor “Caveirao,” or Big Skull, a name originally given to the armoured vehicles used by police special forces in their violent raids on the impoverished favela neighborhoods of Brazil’s major cities.

“The landowners make this ‘Caveirao‘, a tractor all painted black, and tear down people’s homes, even when the people are still inside,” said Bruno, 27.

“There’s violence, shooting. It’s just like in the favelas.”

The situation has deteriorated since 2019, when President Jair Bolsonaro took office.

The far-right leader is an outspoken advocate for the agribusiness industry, and has pushed for protected indigenous lands to be opened up to farming, ranching and mining.

“We’ve received threats, saying we’re going to be kidnapped or killed” for speaking out against anti-indigenous violence, said Bruno.

Undeterred, the group are working on a new album, titled “Retomada” — the name given to ancestral indigenous lands reclaimed from farmers.

The brothers, who have known each other since childhood, started rapping in their school days.

“My brother started writing rap songs when he was eight. We discovered rap on the radio,” said Clemerson.

“At first, the elders didn’t accept it. They didn’t understand why we wanted to rap…. But when they heard what our music was about, they supported us.”

The group got serious thanks to a series of hip-hop workshops offered by a non-profit organisation co-founded by one of Brazil’s most famous rappers, MV Bill.

They released their first album in 2009.

The next year, they were invited to perform at president Dilma Rousseff’s inauguration.

In 2018, they performed at a music festival in Frankfurt, Germany, and were planning a European tour last year until the coronavirus

, which has hit indigenous communities especially hard, Bro MC’s left the reservation for the first time in a year and a half last month to perform in Rio at an awards ceremony for projects promoting racial equality.