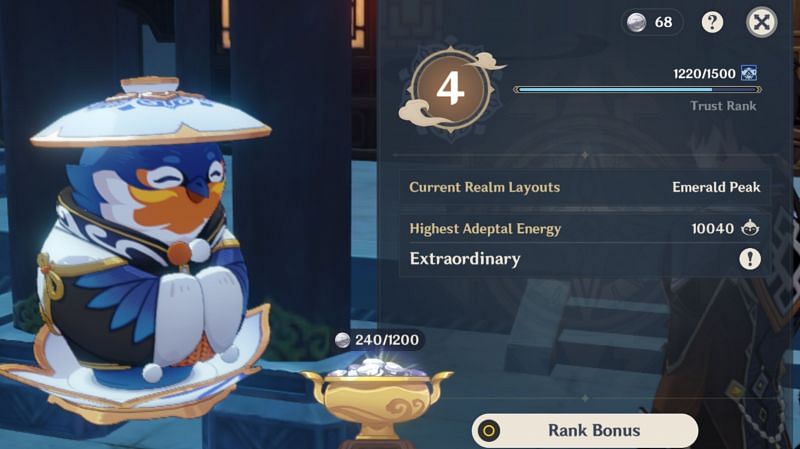 Realm Currency is a currency in Genshin Impact 1.5 Serenitea Pot. The housing realm has a Realm Depot that offers useful items, and Realm Currency is needed to buy them. However, to unlock the items, players have to reach Trust Rank 6 and 8 with Tubby. To do so, they will need a lot of Furnishing Blueprints for the Trust EXP.

For the first time players craft a Furnishing, they will earn some Trust EXP. For this, players need Furnishing Blueprints that can be bought at Realm Depot. The cost varies between 80 and 240 Realm Currency, depending on Blueprint’s rarity. Realm Currency is one of the most important parts of the Serenitea Pot. The only way to gain them is by waiting patiently.

ALSO READ: Genshin Impact Noelle hangout guide (part 2): How to get all the endings in the 1.5 update

How to earn Realm Currency fast: The concept

Realm Currency generates every hour, and the amount generated will depend on the Pot’s Adeptal Energy.

Adeptal Energy is the accumulation of all the stationed Furnishing’s energy. Furnishings need to be placed to increase the energy, so players have to put as much furniture as possible in their Genshin Impact Serenitea Pot. Furnishings that are staying in the inventory will not contribute to Adeptal Energy.

How to earn Realm Currency fast: The fastest method

However, it is important to note that each Furnishings has a “Load” value. Once the realm reaches its maximum load, it can no longer hold more Furnishings. So players should use Furnishings with a low Load value.

To check the Load value of every item, players can go to this site. There, players will assess which Genshin Impact Furnishings are taking up a lot of space and are worth keeping.

By sorting the “E/L” column, players can see which Furnishings they can spam in their realm for the sake of more Adeptal Energy. Note that these Load values are not officially stated, so players should use this information with caution.

Although Fence is an amazing choice, players should focus on indoor Furnishing instead. This is because there are plenty of rewards for outdoor Furnishings, so players will easily hit the Maximum Load.

While some Furnishings have a great Energy per Load value, others may hurt the players’ Serenitea Pot progression. For example, players with Liyue mansion will have almost 500 fewer Loads than those who own the Mondstadt Mansion. This means players can potentially lose up to 1260 Adeptal Energy (approximately).

Other than that, animals also take a lot of Load. These precious creatures have 500 Loads while only giving 100 Energy. For now, players can place their animals indoors. But placing them outdoors is a bad idea if players wish to gain Realm Currency easily.

In short, the easiest way to get Realm Currency in Genshin Impact is by stacking Furnishings that have a high energy value but a low Load. Good examples for this are the “Pine Folding Screen: Billowing Sails” and the “Carved Courtyard Fence.”