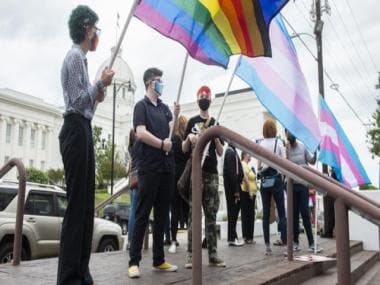 One batch of bills seeks to ban transgender girls from competing on girls’ sports teams in public schools.

Five states have passed laws or implemented executive orders this year limiting the ability of transgender youths to play sports or receive certain medical treatment. There’s been a vehement outcry from supporters of transgender rights – but little in the way of tangible repercussions for those states.

It’s a striking contrast to the fate of North Carolina a few years ago. When its Legislature passed a bill in March 2016 limiting which public restrooms transgender people could use, there was a swift and powerful backlash. The NBA and NCAA relocated events; some companies scrapped expansion plans. By March 2017, the bill’s bathroom provisions were repealed.

So far this year, there’s been nothing comparable. Not even lawsuits, although activists predict some of the measures eventually will be challenged in court.

Rodrigo Heng-Lehtinen, deputy executive director of the National Center for Transgender Equality, says he’s surprised by the lack of backlash, but believes it will materialise as more people learn details about the legislation being approved.

“A lot of Americans are still getting to know trans people and they’re learning about these issues for the first time,” he said. “Over time, they get to know their trans neighbours, they get outraged by these bans, and corporations respond … It’s just a matter of time.”

The president of a major national LGBTQ-rights organizations, Alphonso David of the Human Rights Campaign, attributed the lack of backlash to lack of awareness about the potential harm that these laws could cause to transgender young people.

“Some people in this country have not come to terms with treating trans people like human beings,” David said. “It’s now coming to a head.”

One batch of bills seeks to ban transgender girls from competing on girls’ sports teams in public schools. Such measures have been enacted in Alabama, Arkansas, Tennessee and Mississippi, and implemented by an executive order from Gov Kristi Noem in South Dakota.

Another batch of bills seeks to ban gender-affirming medical treatments for trans minors – including the use of puberty blockers and hormone therapy. Arkansas’ legislators approved such a measure over the veto of Republican Gov. Asa Hutchinson, and similar measures are pending in Alabama, Tennessee and Texas.

Echoing concerns of major medical associations, Dr. Michele Hutchison – who runs a transgender medicine clinic at Arkansas Children’s hospital — says the ban in her state is raising the risk of suicide among some of her patients and forcing some families to wonder if they should move to another state.

More than 400 companies — including Tesla, Pfizer, Delta Air Lines and Amazon — have signed on to support civil rights legislation for LGBTQ people that is moving through Congress, advocates said Tuesday.

And last week, the Human Rights Campaign took out a full-page ad in the New York Times appealing to corporations to denounce the anti-trans bills that have proliferated in Republican-controlled legislatures.

The letter, signed by David, urged corporate leaders “to take action now by publicly denouncing state legislation that discriminates against people, refusing to advance new business in states that are hostile to corporate values and refusing to support sporting events where transgender athletes are banned.”

More than 85 companies have signed a statement drafted by the HRC — including Amazon, American Airlines, Apple, AT&T, Facebook, IBM, Microsoft, PepsiCo, Pfizer and Union Pacific. In polite language, the statement implies a threat: “As we make complex decisions about where to invest and grow, these issues can influence our decisions.”

Overall, the corporate response remains “insufficient,” David said. “But I think we are seeing a turning of the tide as we put more pressure on companies.”

One of the companies signing the HRC statement is the technology giant Oracle Corp, which is planning to bring 8,500 jobs and a $1.2 billion investment to Nashville, Tennessee, over the coming decade. Joe Woolley, who heads the Nashville LGBT Chamber of Commerce, has expressed hope that Oracle — which has not threatened to cancel its plans — might use its leverage to prompt reconsideration of Tennessee’s anti-transgender legislation.

Woolley also says organizers of at least three conventions are considering pulling those events out of Nashville because of the bills, though he has declined to identify them.

Thus far, Tennessee Gov, Bill Lee has signalled that any criticism from the business community won’t sway him.

“Organisations have opportunities to weigh in on the legislative process but ultimately, Tennesseans, through their elected representatives, determine the law in our state,” said Casey Black, a spokesperson for Lee.

In Texas, a coalition called Texas Competes released a letter 19 April signed by more than 40 businesses and chambers of commerce in the state denouncing a batch of pending bills as “divisive, unnecessary and economically dangerous.”

Specifically, the letter denounced “efforts to exclude transgender youth from full participation in their communities.”

In Montana, where a transgender sports ban has won initial approval in the Republican-controlled House and Senate, lawmakers added an amendment stipulating that the measure would be nullified if the federal government withheld education funding from the state because of the policy.

The concern stems from an executive order signed by President Joe Biden banning discrimination based on gender. Montana universities receive around $350 million annually in federal funding, of which $250 million goes towards student loans and grants to cover tuition costs — money that university officials say could be at risk if the administration deemed the sports ban to be unacceptable discrimination.

The extent of any emerging backlash to the anti-trans laws will hinge in part on the NCAA, which played a pivotal role in the North Carolina case.

The NCAA’s Board of Governors issued a statement 12 April expressing strong support for the inclusion of transgender athletes.

“When determining where championships are held, NCAA policy directs that only locations where hosts can commit to providing an environment that is safe, healthy and free of discrimination should be selected,” the statement said. “We will continue to closely monitor these situations to determine whether NCAA championships can be conducted in ways that are welcoming and respectful of all participants.”

Alphonso David said the Human Rights Campaign welcomed the statement, but wanted an even tougher stance from the NCAA, with explicit warnings that events would not be held in states with anti-trans laws.

“The time for concrete actions is now,” David said Monday in a letter to NCCA leaders. “This is a national crisis, and one that necessitates united action, including from the NCAA.”