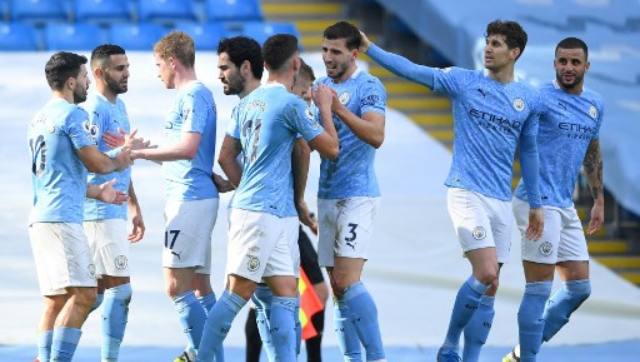 Dias became a monument to Manchester City’s imperious championship. Not unlike the aura Van Dijk holds at Liverpool, he too has become the symbolic sentinel. Excluding calm confidence, gliding on green grass, a two steps ahead of every move.

As the day breaks on another Wednesday morning (wait, wasn’t yesterday Sunday?), can we all agree on the fact that this indeed is the most bizarre timeline? One that Barry Allen as the Flash must have messed up.

Not bizarre in the sense that Manchester United lost again to hand Manchester City the title last night; no, that’s on point.

Leicester City beat United 2- 1 at Old Trafford last night, leaving Liverpool fans staring down the barrel of the European Wild West of the Europa League. See that’s on point too. But more topically, that win helped City notch up another Premier league title, the 2020- 2021 edition.

What is bizarre is the backdrop to this title win, and the nature of City’s stoic myrmidon momentum.

Pep in the time of Corona

Our world is suffering from a collective grief. Someone we know, somewhere down the chain has been left bruising or worse by the pandemic. Pep Guardiola took a 13th placed City (in November) to a title in May. He not only held it together, when few other managers did, but he thrived. AFP

The tooth of this everyday reality has ground town the every man, the millionaire footballer, manager alike.

Yes, it is the lower class who suffered the most, but it easy to forget that the highest earners in football come from the lowest rungs of society. And that people close to them have been naturally, unnaturally afflicted.

Football despite being hijacked by the bougie is still very much a working class game.

Yet despite it all, Pep Guardiola took a 13th placed City (in November) to a title in May. He not only held it together, when few other managers did, but he thrived. 15 back-to-back league wins were recorded at a time other contenders were withering. City won the League Cup and find themselves in the Champions League final.

It helps to remember that Tottenham were looking like title contenders at one point in the season, and that Liverpool were at the top of the league on Christmas day. They are now seventh and sixth respectively.

City had their worst scaring start to a campaign since 2006. They looked lethargic, and devoid of spirit, the tactics of previous seasons were coming undone. Questions were asked about where their heads were.

While others lost the plot, on the backdrop of a burning world, Pep Guardiola sat in the cafe and said to himself, “This is okay.” And then made sure it was, with his galaxy brain intellect.

The Lex Luthor analogy used by Barney Ronay of The Guardian on Tuesday night is sumptuously placed, for the comic book nerds out there who also happen to be football fans.

It is apt because it is when the world is burning, and Superman goes missing, is when Lex Luthor chooses to be a shining beacon for humanity’s intellectual zenith and its pragmatic potential. The fictional Lex Corp, like Manchester City, is generously bankrolled by its wealthy shareholders for sure, but it is powered by the sheer problem-solving output of Lex Luthor and Pep Guardiola’s bald heads.

Once a victim of the long ball game, Pep learned to use it like an exact science, against teams that press City higher up the pitch. Turning a weakness to a strength by wielding it is from the tome of Sun Tzu. Pep Guardiola used Kevin De Bruyne as his brush on his battle plan. His long range passing ability became the perfect booby trap.

Additionally, instead of having one primary goal-scorer and attacks being funneled through a focal point, goals were spread around among attacking midfielders. Instead of Aguero, you saw Ilkay Gundogan as the lead-scorer for this version of City’s title charge. Bizarre.

The ancient Chinese strategist, Sun Tzu emphasised on the economy of collaborative battlefield choreography, that would draw the enemy in to run more, while they themselves would conserve more energy and eventually outlast their rivals. That is exactly what City did.

Somewhere towards the start of December, City started to press less often, less harder, but more efficiently in selective strategic zones, like the wider areas of the final third. An area where teams like Liverpool, Leicester City, Wolves etc does damage from.

The number of crosses coming in against City dropped dramatically. There were fewer heads chances for their opponents. Majority of through balls were being snuffed out by an ever-vigilant Ruben Dias. Riyad Mahrez thrived in this tight knit system that allowed players like him to drift into spaces offensively.

The defence started to take the shape of a tightly bolted chest, in the middle of a shark infested pool.

Manchester City’s title win is a victory of Stoicism. This is itself a bizarre statement considering the way and the nature of how this team was put together by oil money.

But a look at Phil Foden’s development into a potential world beater justifies perhaps the very means. Unlike Chelsea of old who would stockpile young players due to an over-reliance on their superstars, Pep has accelerated the tactical intelligence and general development of his players by at least five years just by going through this one season together; showing the resilience of mentality giants.

Pep lauded his players last night in a club statement.

“This has been a season and a Premier League title like no other. This was the hardest one. We will always remember this season for the way that we won. I am so proud to be the manager here and of this group of players. They are so special. To come through this season – with all the restrictions and difficulties we’ve faced – and show the consistency we have is remarkable. It is relentless. Every single day, they are there, fighting for success, trying always to be better. They have been so, so resilient.”

In a world without Superman, suffering from its abandon, greed and alienation, stoicism is perhaps exactly football needs to earn its trust back after the Super League fiasco.

World leaders could take a page out of Guardiola’s playbook of crisis management.

A win built around the monument of Ruben Dias

When the fresh-faced Ruben Dias came from Benfica, very little was expected from him as per rival fans forums. Ruben Dias became a monument to Manchester City’s imperious championship. Not unlike the aura Van Dijk holds at Liverpool, he too has become the symbolic sentinel. AFP

A few months on, Manchester City have only conceded nine away goals so far this campaign. This bumped up their goal different a league high +46.

Dias became a monument to Manchester City’s imperious championship. Not unlike the aura Van Dijk holds at Liverpool, he too has become the symbolic sentinel. Excluding calm confidence, gliding on green grass, a two steps ahead of every move.

Embodying both the Stopper and the Sweeper centre-back, he’s the prototype of the modern centre-back being perfected. Dias became the platform upon which Pep Guardiola laid his newfound plans of atypical defensive orthodoxy.

A man of lesser spirit would have hiccupped at the task being the centre-fold to the evolution of a new design. He was thrown at the deep end, but he emerged like the ancient Colossus at the gates of Rhodes— hand jutting outwards, gesturing, “no.”

Pep will know that it was only when City stopped leaking goals that they started scoring goals. Their fans would too. And while defenders are usually relocated to the footnotes of championship history, this campaign will assure that Dias occupies the headlines.