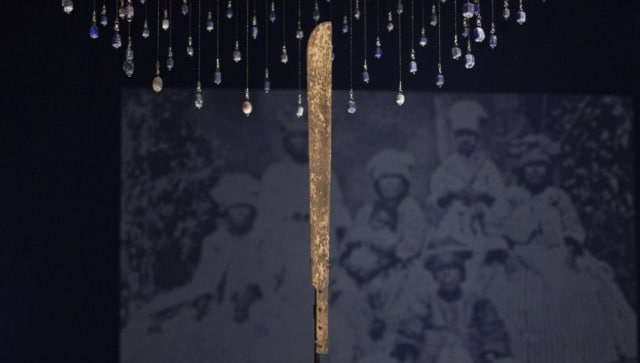 A machete used for cutting sugar cane is displayed at the Slavery exhibition Rijksmuseum in Amsterdam. The stark contrast between finery and brutality, wealth and inhumanity is a recurring pattern at the museum’s new exhibition. (AP Photo/Peter Dejong)

Amsterdam: The delicacy of one of the first objects in a new exhibition at Amsterdam’s Rijksmuseum belies its brutality. At the end of a thin iron rod are the artistically interwoven letters GWC — used to brand the initials of a Dutch trading company into the skin of enslaved workers.

The stark contrast between finery and brutality, wealth and inhumanity is a recurring pattern at the museum’s unflinching exhibition titled, simply, Slavery, that examines the history of Dutch involvement in the international slave trade.

Nearby, a huge wooden set of stocks and heavy iron chains and locks used to constrain enslaved people stands close to a small box, intricately decorated with gold, tortoiseshell and velvet celebrating some of the valuable commodities traded by the Dutch West India Company in the 18th century: Gold, ivory and human beings.

The exhibit, being opened Tuesday by King Willem-Alexander, tells the story of slavery by drilling down into the personal stories of 10 people, ranging from enslaved workers to a wealthy Amsterdam woman.

“We wanted to make the case, that this is a history that speaks to anybody in the Netherlands. It belongs to all of us, so that’s why we chose a personal approach,” Valika Smeulders, head of the museum’s history department, told The Associated Press.

pandemic — at a time when scrutiny of many nations’ brutal colonial history has been spurred by the Black Lives Matter movement that swept the world last year after the death of Black man George Floyd.

School children will be able to visit the museum beginning this week, but the exhibition will not open to the public until the Dutch lockdown eases further, possibly in June.

Amsterdam had a significant role in the global slave trade — the stately mansions lining its canals attest to the fortunes made by Golden Age traders often with the use of slave labour. That history has led to calls for a formal apology from the current municipality.

“Well, apologies are in the air, absolutely. And I think that, with this exhibition, as a museum, what we are adding to that is that we bring this story in the most honest way possible for us at the moment,” said Smeulders.

The Dutch show is part of a broader movement to re-examine colonial histories. In neighbouring Belgium, the Africa Museum near Brussels re-opened a few years ago after a major renovation and shone a light on the country’s dark colonial history in Congo.

Germany is returning hundreds of artefacts known as the Benin Bronzes that were mostly looted from West Africa by a British colonial expedition.

Among the stories is that of Wally, an enslaved man forced to work on a sugar plantation in the colony of Suriname. In an audio presentation, his history is narrated by former kickboxing world champion Remy Bonjasky, whose ancestors worked on the same plantation.

Wally became involved in a conflict with the managers of the plantation in 1707. He and other enslaved people fled before they were recaptured, interrogated and executed.

Wally and his fellow escapees “were to have their flesh torn off with red hot pincers while being burned alive,” Bonjasky says in the online narration. “Their severed heads would later be displayed on spikes as a warning.”

The “might” shown by Wally and the other enslaved men “is still in my blood,” Bonjasky says. “It has been passed down through generations and is one of the reasons why I was able to become kickboxing world champion three times.”

Another story in the exhibition that provides a glaring contrast to the horror of Wally’s short life is that of Oopjen Coppit, the widow of Marten Soolmans, whose father owned Amsterdam’s largest sugar refinery, processing crops harvested by enslaved men and women in South America.

In the exhibition, she is a personification of the wealth generated for a privileged few by enslaved workers. In a full-length portrait painted in 1664 by Rembrandt van Rijn, she wears a long black, lace-trimmed dress accessorized a pearl necklace and earrings.

“That we’re able to use Rembrandt to speak about the history of slavery is really exciting and really new,” Smeulders said.

Oopjen’s second husband, Maerten Daey, also had links to the slave trade. Before their wedding, he served as a soldier with the Dutch West India Company in Brazil, where he kidnapped and raped an African woman called Francisca, fathering a daughter in 1632, according to church records cited in the exhibition.