The 1,500-pound (680-kilogram) antiquities had been stolen and exported from Thailand — a violation of Thai law — roughly a half-century ago, authorities said, and donated to the city of San Francisco, authorities said. 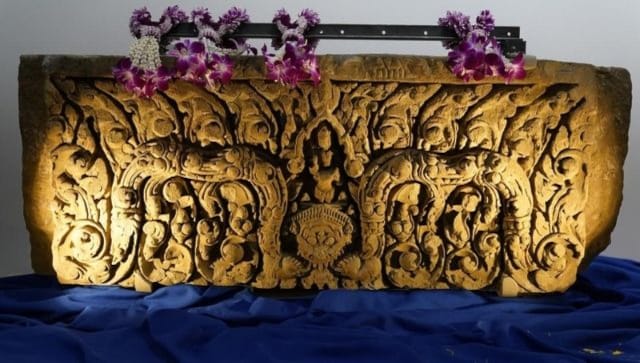 Lintels dating back to the 9th and 10th century, allegedly stolen, were returned by San Francisco to Thailand in a ceremony on 25 May. Image via The Associated Press/ Ashley Landis

Los Angeles: Two stolen hand-carved religious artifacts, sandstone lintels dating back to the 9th and 10th centuries, were returned to the Thai government on on 25 May in a ceremony more than 50 years overdue.

San Francisco, which owns the museum, agreed to hand over the ancient sandstone slabs following a three-year investigation by the US Department of Homeland Security and a civil lawsuit. The lintels had been structural parts of two religious sanctuaries in northeastern Thailand.

Records showed that the lintels had been obtained by a collector in galleries in London and Paris in the 1960s, according to the civil complaint. The collector, Avery Brundage, was apparently aware that at least one of the lintels had been illegally taken out of Thailand, the complaint states. Brundage, a former controversial president of the International Olympic Committee who donated the art to establish the museum, died in 1975.

The museum, however, contends that authorities conflated the two lintels with a third — which Brundage actually returned to Thailand in 1970 when he found out it may have been illegally removed from the country, according to Robert Mintz, deputy director of the Asian Art Museum. The third lintel was never part of the San Francisco art collection, Mintz said, and museum officials say there’s no evidence Brundage knew the other two lintels may have been stolen.

The Thai government had been trying to get the museum to return the other artifacts since 2016. The Los Angeles Times reported the mystery surrounding the lintels, and various attempts to return them to Thailand, in March.

Mintz said the curators are entrusted with artifacts held for the public and it was their responsibility to determine if any challenges to provenance are valid.

Mintz said the museum followed its bylaws — which stipulate certain steps must be taken — and did not seek to delay the return of the lintels.

“We’re very happy that the Thai lintels have officially returned,” he said. “The two lintels really are going to where they belong.”

But the museum still maintains that the lintels may not have been stolen. The artifacts left Thailand “under circumstances that are very unclear,” Mintz said, and turned up in Europe, where Brundage bought them.

No documentation regarding their export from Thailand has ever been found — which US and Thai authorities say is evidence they were stolen. But Mintz says that a lack of evidence does not mean there is proof of that a crime was committed.

The case prompted the museum to review the provenance of its other artifacts.

The San Francisco city attorney, which represented the museum in litigation, did not immediately return a request for comment on 25 May.

US officials stressed the importance of repatriating stolen cultural artifacts. The repatriation ceremony, which included Thai dancers and prayers, was held in Los Angeles because the consulate is in the city — which also has the largest Thai population in the US.

The Thai ambassador to the US, Manasvi Srisodapol, called the ceremony part of the lintels’ “sacred journey back home” and acknowledged the ongoing illegal trade of Thai artifacts in the black market.

“I do wish that the story of the Thai lintels will help raise public awareness to prevent removal of historic, religious and cultural treasures form their original sites in local communities,” he said.

Tatum King, the special agent in charge for Homeland Security Investigations in San Francisco, said the case reinforces the need for museums and art collectors to inventory their items and see if any are in fact stolen artifacts.

“Museums are often the front line of this, and we need their help,” King said.