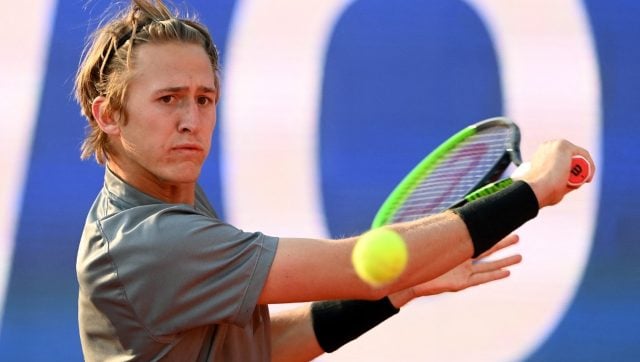 Saturday’s victory made Korda the first American player to win a clay court tournament since Sam Querrey in Belgrade 11 years ago. Parma: On the eve of the French Open, 20-year-old American Sebastian Korda scored a career breakthrough when he beat Italian Marco Cecchinato, 6-2, 6-4, in Parma for a first title.

Korda, the son of former world No. 2 and Australian Open winner Petr Korda, had reached just one ATP Tour final before the Parma event.

Cecchinato, who won all three of his titles on clay, comes from Brescia, 90 kilometres from Parma.

The fans allowed into the first-time event threw their support behind the local boy.

“Today I played a really tough opponent and the crowd wasn’t easy,” Korda said. “They kept cheering him on, but I’m really proud of myself and how I handled it.”

Although his father is Czech, Sebastian Korda, who was born in Florida, chose to represent the US.

Saturday’s victory made him the first American player to win a clay court tournament since Sam Querrey in Belgrade 11 years ago.

“This is something that I’ve dreamed of,” Korda said, adding that he had expected to win a title sooner. He finished runner-up at an event in Florida in January.

“I really thought I was going to get it done in Delray Beach, and I was a little heartbroken.”

“But I stayed positive, even with such a bad first part of the clay-court season,” he said. “I took a couple of days off, recharged my batteries, and had a really good practice week in Prague with my dad and my coach,” said Korda.

Korda plays Pedro Martinez in the first round at Roland Garros where his father reached the final in 1992 losing to Jim Courier.

He reached the last 16 last year on his main-draw debut in Paris before succumbing to eventual champion Rafael Nadal.