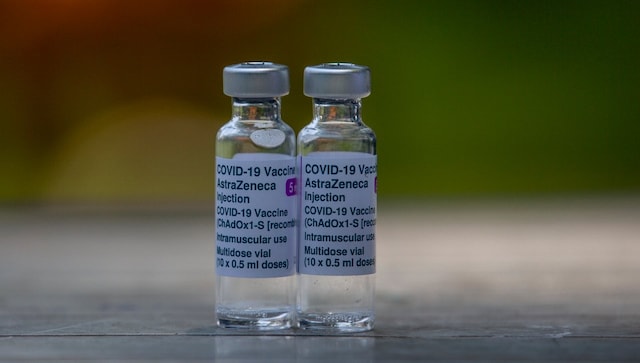 Empty vials of Covishield, Serum Institute of India’s version of the AstraZeneca vaccine are seen on a table as people are inoculated against COVID-19 at a park in Srinagar, Indian controlled Kashmir, Tuesday, May 25, 2021. (AP Photo/ Dar Yasin)

vaccines are “highly effective” in preventing hospital admission with the Delta variant, Public Health England said on Monday. Scientists said two jabs of the Pfizer/BioNTech vaccine stopped the need for in-patient treatment in 96 percent of cases. With a double dose of the Oxford/AstraZeneca shot, the rate was 92 percent, PHE added. The findings were published as Britain grapples with a surge in coronavirus

cases, most of which were of the Delta strain, which first emerged in India.

The increase is again raising concerns about the potential strain on hospitals, prompting calls to postpone a planned lifting of all social distancing curbs on 21 June.

The restrictions have been in place since January, when the Alpha strain of the coronavirus

, which was first identified in Kent, southeast England, spread rapidly.

The government, which began a mass-vaccination programme with the Pfizer/BioNTech jab in December last year, is pushing for more people to get two jabs.

PHE said the vaccine effectiveness for the Delta variant is comparable to that for the Alpha strain.

Head of immunisation Mary Ramsay said: “These hugely important findings confirm that the vaccines offer significant protection against hospitalisation from the Delta variant.”

Further investigations were under way to determine the level of protection against death from the Delta variant, PHE said, but added that it was expected to be “high”.

The public health body looked at 14,019 cases of the new variant in England between 12 April and 4 June.

Previous analysis indicated that one dose of vaccine is 17 percent less effective in preventing a person developing symptoms from the Delta variant than the Alpha one.

But the latest research showed there was only a small difference after two doses.

Simon Kolstoe, senior lecturer in evidence-based healthcare at the University of Portsmouth, said the inoculation programme was clearly working.

Nearly 57 percent of the UK’s adult population has had two doses, according to government statistics.

But he added: “We can only be confident in lifting all restrictions once we know that the link between large-scale infections and hospital admissions has been broken.