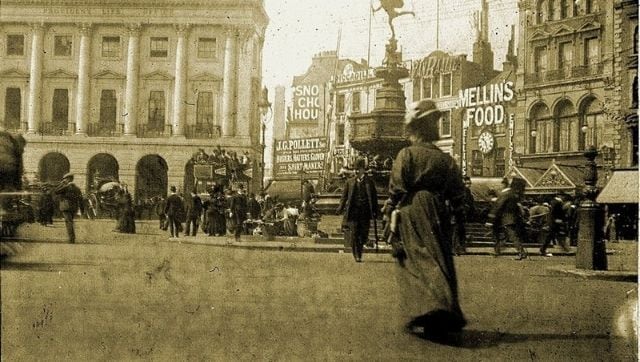 We’ve all read stories of women who were coerced and abused in the sex industry. They pepper our newspapers, televisions and films – and Lydia Harvey’s story is no different. She was abused, confined against her will and never saw a penny of the money she earned selling sex. Lydia Harvey was brought to London where she was forced to solicit in the West End. Public domain via Wikimedia Commons

In January 1910, a 16-year-old girl named Lydia Harvey boarded a steamship in Wellington, New Zealand, bound for Buenos Aires. She had been recruited by a pimp to work in Argentina’s booming sex trade. After a traumatic month in South America, she was brought to London where she was forced to solicit in the West End. It was here that Metropolitan police officers found her and used her as the star witness in a case against her traffickers.

Lydia Harvey’s story probably sounds familiar to 21st-century ears, even if it is a little surprising to learn that sex trafficking — often thought of as a new problem – was considered a pressing social issue a century ago. We’ve all read stories of women who were coerced and abused in the sex industry. They pepper our newspapers, televisions and films – and Lydia Harvey’s story is no different. She was abused, confined against her will and never saw a penny of the money she earned selling sex.

She was also held up by police and the media as an exemplary victim — a cautionary tale about the dangers poor young women faced when they dared to dream of a better, more exciting life. Who she really was — and her complex, human experiences — did not matter. She was just another girl who had disappeared. First, from her home and workplace and next, from the historical record.

In my recent book, The Disappearance of Lydia Harvey, I pull at the threads of the archive and try to find Lydia Harvey in all her human complexity, as well as the lives of the others entangled in her case: her traffickers and their prosecutors, the journalist who told her story and the social worker who supported her in her journey home. In doing so, I question the simplistic narratives about trafficking and sexual labour in the past and in the present.

When Lydia Harvey decided to join a charming man and his wife on a steamship to Buenos Aires, she was young and naive. She dreamed of travelling, of adventure, of nice clothes, and did not fully understand what she was agreeing to. But she understood all too well the kind of work and life she was attempting to leave behind.

Harvey worked as a domestic servant, putting in over 70 hours a week for well below anything resembling a living wage. Living with her employers, she was constantly under their scrutiny and, without labour rights or protections, almost entirely at their mercy.

When she travelled from New Zealand to Buenos Aires, she left one highly exploitative industry for another. The key difference, it seemed, was that the media was obsessed with exploitation in the sex industry and ignored the widespread exploitation young working-class women faced in most other forms of work.

Like girls and women today, whose complex lives are turned into awareness-raising anecdotes, Harvey’s story was sold, twisted and oversimplified. She was held up as an “ideal victim” of trafficking, yet she was still criminalised and didn’t receive the justice and support she deserved. Once “rescued” from prostitution, she was coerced back into domestic service – a job she hated. The poverty that had pushed her into selling sex – and the dreams she had for a better life – did not go away, nor did her determination to fight for them.

Meanwhile, other young women whose backgrounds, past sexual experiences and ethnicity marked them as undeserving of sympathy, were criminalised and deported – all in the name of fighting the terrible traffic in women.

In many ways, things have changed very little in the 110 years since Lydia Harvey boarded that steamship. The anti-trafficking movement, born in the late 19th century, still focusses on migration restriction and criminalisation as the supposed solutions to the problems of exploited sexual labour.

Trafficking is a serious social problem, but one that is most often caused by poverty, criminalised migration and labour exploitation in legal industries. And yet we still moralise, criminalise and toughen border controls in the name of anti-trafficking – politically expedient and short-sighted “solutions” that do more harm than good.

Just as they did a 100 years ago, young women, caught in cycles of poverty and abuse, engage in sexual labour as a survival strategy. And despite the idealistic rhetoric of “abolishing” prostitution, they are still offered few viable labour alternatives should they wish to leave sex work. Despite a century of attempts to ostensibly build a better world, Lydia Harvey would find our present-day all too familiar.