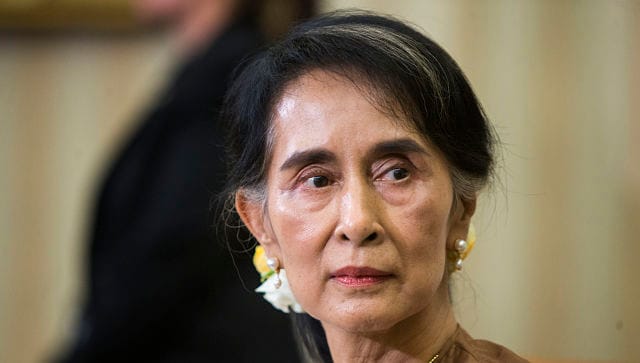 The trial is widely seen by her supporters and independent observers as bogus and as the ruling junta’s attempt to tarnish her reputation and further tighten its grip on the country.

Suu Kyi and her National League for Democracy party had been due to start a second five-year term of office after winning a landslide victory in a General Election last November but she and other members of her government and party were arrested after the 1 February coup.

The move reversed years of democratic reforms in Myanmar after decades of military rule and sparked widespread protests and international condemnation. Suu Kyi has not been seen in public since her arrest and her lawyers say they don’t know exactly where she is currently being held.

She has also had only limited time to consult with her legal team.

The trial, which is closed to the public and media, opened Monday in the capital Nay Pyi Taw, with police outlining several of the cases against her.

Now let’s examine the charges against her and the likely punishment she faces in the event she is convicted:

What are the charges against her?

Suu Kyi has been charged with using illegally imported walkie-talkies — yes, you read that correctly — that were for her bodyguards’ use; unlicensed use of those radios; and violating the Natural Disaster Management Law by allegedly breaking pandemic restrictions during last year’s election campaign.

Suu Kyi also faces more charges that have yet to go to trial, among them accepting illegal payments of gold and more than half a million dollars in cash as bribes.

She is also accused of abusing her authority when renting two areas of land for her charitable foundation.

The sedition charge, which is sometimes described as incitement, calls for up to two years’ imprisonment for anyone found guilty of causing fear or alarm that could cause an offence against the State or public tranquility.

The offence has been law since Myanmar was a British colony, and has been criticised as a catch-all statute that infringes on freedom of speech and is used for political repression.

Some of the other charges carry potential penalties as high as 15 years in prison.

But a conviction on virtually any count could result in Suu Kyi being banned from contesting any future election, which many believe is the military’s goal.

One of the military’s justifications for the coup was that last year’s election was marred by fraud, an assertion rejected by independent poll watchers. Suu Kyi’s trial has renewed calls for her release and return to civilian rule.

UN deputy spokesman Farhan Haq, responding to a question on Secretary-General Antonio Guterres’ reaction to the trial, said on Monday the UN position is clear: “We want her and all of the senior members of her administration to be freed.”

“The secretary-general has called for and continues to call for a reversal of the 1 February coup and the restoration of the legitimate government of Myanmar, of whom Aung San Suu Kyi is a member,” Haq said.

Rights groups have said there is little chance  Suu Kyi will receive a fair trial.

Phil Robertson, deputy Asia director of Human Rights Watch, said the pandemic charges are related to cases during the campaign where crowds came to see Suu Kyi or she greeted them, and noted that the military had not enforced such regulations for gatherings sympathetic to, or organised by them.

“Public health measures should not be applied in an arbitrary fashion,” he said. “Clearly there are double standards being applied in the prosecution of Aung San Suu Kyi.”