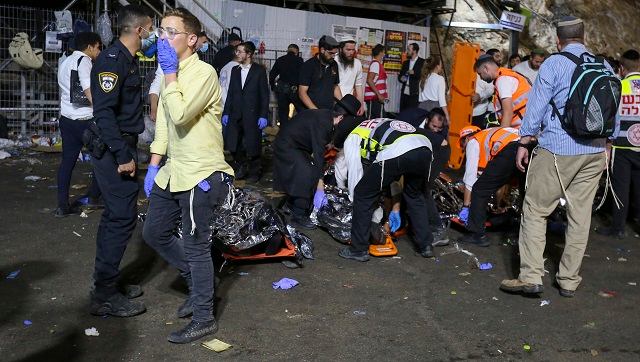 The disaster occurred at Mount Meron after midnight at the main celebrations of Lag BaOmer, when ultra-Orthodox Jews convene at the tomb of a prominent rabbi Israeli security officials and rescuers carry bodies of victims who died during a Lag Ba’Omer celebrations at Mt. Meron in northern Israel, Friday, April 30, 2021. Israel’s national rescue service has officially confirmed some deaths at a stampede during a religious festival in northern Israel. (David Cohen/JINIPIX via AP)

Meron: A massive stampede at a densely packed Jewish pilgrimage site killed dozens of people in northern Israel on Friday, leaving emergency workers scrambling to clear the area and evacuate the critically injured.

The disaster occurred in Meron at the site of the reputed tomb of Rabbi Shimon Bar Yochai, a second-century Talmudic sage, where mainly ultra-Orthodox Jews flock to mark the Lag BaOmer holiday.

Closed last year due to coronavirus

restrictions, this year’s pilgrimage was the largest public gathering since the pandemic began.

Rescue workers had initially said that chaos erupted when a section of stadium seating collapsed but later revised that account to say the casualties had been caused by a stampede.

Israeli media published an image of a row of bodies covered in plastic bags on the ground.

The Magen David Adom, Israel’s rescue service, reported dozens of dead and said it would “fight for the lives of dozens wounded, and will not give up until the last victim is evacuated.”

The army said its medical teams and “a number of Israeli Air Force helicopters with medical teams… are assisting in the mass casualty incident in Mount Meron.”

“The forces are assisting in the evacuation of injured and killed civilians and providing medical treatment at the scene,” it added.

“This is one of the worst tragedies that I have ever experienced,” said Lazar Hyman of the United Hatzalah volunteer rescue service, who was at the scene.

“I have not seen anything like this since I entered into the field of emergency medicine,” he added.

Yehuda Gottleib, one of the first responders from United Hatzalah, said he saw “dozens of people fall on top of one another during the collapse”.

“A large number of them were crushed and lost consciousness.”

Israel has fully vaccinated more than half of its 9.3 million population against coronavirus

, but restrictions on massive public gatherings remain in place to stem the spread of the virus.

Authorities had authorised 10,000 people to gather at the site of the tomb but organisers said more than 650 buses had been chartered from across the country, bringing 30,000 pilgrims to Meron.

The Meron pilgrimage is primarily attended by ultra-Orthodox Jews, a community that has at times resisted mandatory health and safety measures during the pandemic.

Around 5,000 police had been deployed to secure the event.

The area has since been closed, with rescue workers and security forces attempting to clear the area.