Which Free Fire character is better for aggressive gameplay in May 2021?

Garena Free Fire is a widely played battle royale title. The characters in the game have distinct abilities that, if used correctly, can give players an edge when it comes to online gameplay.

Aggressively playing to boost the kill count can be a beneficial tactic. However, it is often hard to pick the right character for aggressive gameplay with the massive number of choices in Free Fire.

This article will take a look at Chrono and K’s abilities and compare them to see which is best suited for aggressive gameplay in Free Fire.

Assessing the abilities of Chrono and K in Free Fire

This effect has a 200-second cooldown and lasts just three seconds.

Time Turner increases the player’s speed by 15 percent at its most optimum level (level 6). The effect lasts eight seconds and has a 170-second cooldown.

Ability: Master of All

K’s Master of All skill empowers players with 50 points of EP. When in jiu-jitsu mode, within a 6 meter radius allies will earn a 500 percent increase in EP conversion rate. When in psychology mode, the character can gain 2 EP every three seconds, up to a maximum of 100 EP.

For the mode switch cooldown, K takes up three seconds. K regains 2 EP every 2 seconds up to a maximum level of 150 EP at his highest skill level 6. 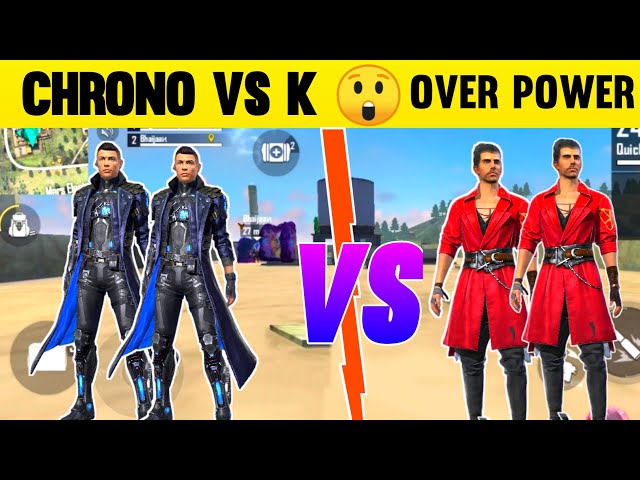 Chrono forms a protective shield and enhances the player’s movement speed in a match. It is a great ability but Chrono’s cooldown time is the biggest demerit.

On the other hand, K in psychology mode has the power to increase the EP and strengthens the HP level which plays to the player’s advantage.

Based on the ability comparison, K is a better character than Chrono to use for aggressive gameplays because his power to regenerate EP, helps players to gain a certain HP advantage over their enemies.

Chrono was a great choice before the OB27 update but after being nerfed, his cooldown time is greatly increased which hampers the gameplay style of aggressive players.