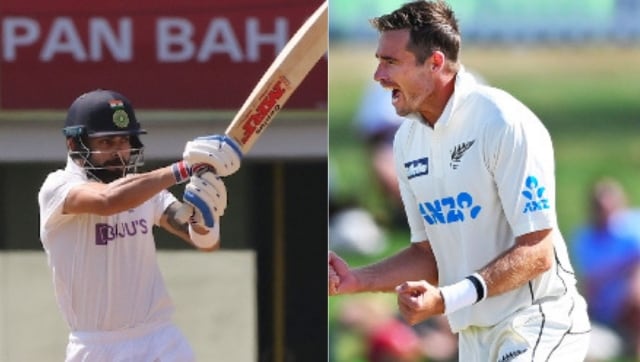 World Test Championship Final: Virat Kohli vs Tim Southee, Kyle Jamieson vs Rishabh Pant and other player battles to watch out for

In the most awaited clash before the ICC T20 World Cup, India and New Zealand will lock horns in the final of the ICC World Test Championship (WTC) from 18-22 June. The inaugural edition of WTC, which began in 2019, was launched to boost the popularity of the game’s longest and purest format.

Virat Kohli-led India topped the points table with 520 points, playing six series and winning five of them. Kane Williamson-led Black Caps, meanwhile, were second only to India with 420 points, winning three series out of their five.

While Kiwis got the better of Indians the last time the two sides squared off against each other, India’s iconic series win in Australia in the absence of their first choice-attack will instill a lot of confidence in Kohli’s men.

The contest promises to evenly matched, with the venue (the Rose Bowl in Southampton, England) being a neutral one. As pointed out by many in the cricketing fraternity, New Zealand might hold a slight advantage, with two Tests against England under their belt that would have allowed them to get accustomed to the English conditions.

Given both sides are stacked with game-changing players, fans will have plenty of exciting battles to look forward to. Here, we take a look at some of them:

Tim Southee has dismissed Kohli 10 times — the most by any bowler in international cricket so far. When it comes to red-ball cricket, in particular, the Indian skipper has been dismissed by New Zealand’s pace spearhead three times in five innings. Going by the statistics, the Kohli vs Southee contest promises to be an enchanting one, quite similar to the Kohli vs James Anderson rivalry a few years back. In terms of overall form too, it is Southee who holds the upper hand in the battle. Having picked up 51 wickets from 10 matches, the speedster is New Zealand’s leading wicket-taker in the WTC.

Kohli, on the other hand, averages 43.85 in the WTC and last scored a century in November 2019. The India skipper will be hungry to end his century drought but will need to be at the best of his technique and temperament to counter Southee, who can be lethal with his ability to move the ball in the air and off the seam.

Another important battle will be the one between these two Mumbai Indians teammates.

Rohit Sharma has been the second-highest run-scorer for India in the WTC, with 1,030 runs from 11 matches, including four centuries and two fifties. Boult, meanwhile, has been the Kiwis’ third-highest wicket-taker in WTC, with 34 wickets from nine matches.

In the past, Rohit has been in a spot of bother when facing the in-swinging delivery. In that sense, an astute customer like Boult, with his left arm angle and ability to move the ball both ways, might pose problems for the Hitman. As an opener, it will be extremely crucial for Rohit to see off the initial spells of bowling, since conditions are expected to assist the seamers. A well-set Rohit can be a nightmare for any opposition but Kiwis too have world-class seamers capable of making the most of the conditions at Southampton.

Both Jamieson and Pant are extremely talented and proven match-winners.

Standing at 6ft 8 inches, Jamieson has been a revelation for Black Caps, ever since he made his Test debut on home soil against India. In that series too, he had posed problems for the likes of Cheteshwar Pujara and Virat Kohli. He has scalped 36 wickets, including four five-fors and even a 10-wicket haul in the WTC thus far. Speaking of Pant, one is reminded of the left-hander’s audacious approach to batting. Once considered way too reckless for a spot in the XI, he has completely turned things around, amassing 662 runs in 18 innings in the WTC, including a century and four half centuries.

Jamieson can extract extra bounce due to his tall frame and can prove to be a handful, more so in the event of a greenish tinge at Southampton. But India’s southpaw isn’t bogged down by pace or bounce and sticks to his natural game in every format.

Currently the world’s top-ranked Test batsman, Kane Williamson is capable of soaking immense pressure, and doing so with a calm head. Maintaining a brilliant average of 58.35, he amassed 817 runs from 14 innings, the most by any Kiwi batsman in the WTC.

Rather than brute force, Williamson relies on timing, much like his Indian counterpart Virat Kohli. His watertight technique against the moving ball as well as his ability to efficiently play spin make him a tough nut to crack.

Arguably one of the best upfront and at the death, Jasprit Bumrah hasn’t been at his best lately. He hasn’t been a regular feature in the XI either, due to injury and other reasons. The speedster didn’t look at his best during the recently-concluded England series, picking up four wickets from three innings at an average of 32.25. Conditions at Southampton are likely to assist seamers and Bumrah will relish the same. India will heavily rely on their strike bowler to get them breakthroughs at crucial intervals.