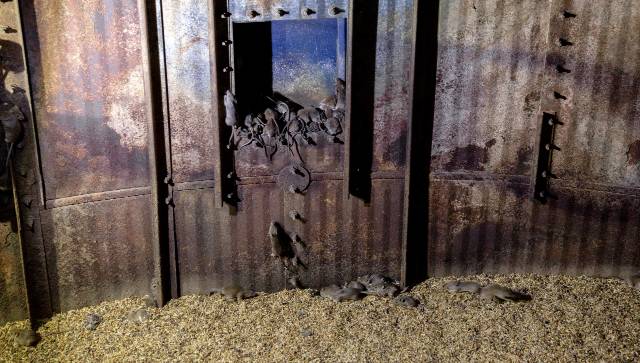 For what has been half a year but felt to many like an eternity, the rodents have chewed a swath through southern Queensland, New South Wales and northern Victoria

Tottenham, Australia: The stench hits you first, pungent, musty and rotting. Then you hear them: a sound like ocean waves, or pouring rain hitting concrete. And the occasional squeak.

The horror lurking in the darkness is a throng of thousands of mice swarming above, around and inside a storage bunker of wheat at the Fragar family’s farm seven hours west of Sydney. After a long, painful drought, the mice are ravaging the family’s first good harvest in years and endangering the next one, putting their business on the brink of ruin.

Their farm is just one of thousands along the country’s eastern grain belt that are contending with what local residents call the worst mouse plague in living memory, with far-reaching consequences both in the fields and in rural communities.

It’s like “watching the mice eat away at your future,” said Kathy Fragar, 51.

For what has been half a year but felt to many like an eternity, the rodents have chewed a swath through southern Queensland, New South Wales and northern Victoria, the flip side to the good fortune of the break in a once-a-century drought.

In addition to devouring crops, they’ve bitten people in their beds, dropped out of air-conditioning units and gnawed through appliances. They’ve eaten the toes off chickens in their pens. They’ve been blamed as whole towns have lost phone reception and a house has burned down.

The mice have added unpleasant tasks to many people’s routines. Storekeepers set traps and drown the mice they catch. Residents burn dead mice in backyard “crematories.” Grocers clean up flour that spills onto the floor from nibbled packages. Hospital workers place diffusers in waiting rooms in a largely fruitless attempt to mask the stink of rotting rodent corpses.

At the Fragars’ farm, the mice scatter when the light hits them, sliding like a waterfall down the sides of a bright blue tarp and disappearing down holes and into the grass. For every visible mouse, there are countless more underneath the covering.

The family’s wheat bunker has visibly shrunk. The mice won’t eat their way through the whole thing — if they burrow too deep, they will suffocate. But Jeff Fragar, 55, said the family would be lucky to sell 500 of the 700 metric tonnes they had harvested. That could be $30,000 down the drain.

Other farmers have had crops rejected or turned away from ports after mouse droppings were found. Some, like Terry Klante, who farms near the Fragar family, have fended off the mice with baiting and fencing but still keep a nightly vigil, looking for signs of infestation.

For Jeff Fragar, the greatest concern is whether he can get this year’s wheat planted. The family is in the middle of sowing season. The mice will eat any seeds they put out now. But the longer they wait, the more they risk a lackluster crop, or no crop at all.

A lobbying group, NSW Farmers, warns that New South Wales could lose a billion dollars’ worth of harvests as growers scale back their winter crops of wheat, barley and canola.

“We’ve had three years where we didn’t even get our crop in the ground because of the drought,” Fragar said. “And we have one half-reasonable year, which the mice are now destroying. If we don’t get it in again, I’d say we’d be out of luck here. The bank won’t carry us any further.” Australia suffers a mouse plague every decade or so. The current one came after bountiful rains last year that left farmers’ silos overflowing with grain. They stocked up on feed for their animals, and all that grain gave the mice a perfect source of food.

Changes to farming practices have also been a factor. Crop farmers used to burn stubble to clear the land. Over the past 15 years, they’ve started sowing new crops directly onto the old stalks, for environmental reasons. That has had the unintended consequence of creating more sources of food and shelter for mice.

These natural and human-made causes, along with the fast breeding cycles of mice — they can have six to 10 offspring every three weeks or so — have allowed their numbers to quickly explode into the millions.

At the same time, government help has been slow to arrive. The New South Wales government recently announced a support package that includes rebates on mouse bait and the lifting of a ban on the use of the poison bromadiolone, which the state agricultural minister, Adam Marshall, said would be the equivalent of “napalming” the mice.

In the tiny town of Tottenham, near the Fragars’ farm, residents say this mouse plague is the longest they have lived through.

The coming Southern Hemisphere winter has slowed the mice down. Robert Brodin, who owns a store called Tottenham Rural Trading, said he had been catching 30 or 40 mice in his store each morning but now caught only 15 or 20.

But he’s not confident it will end anytime soon. “They used to say once they start eating each other, it’ll be over, but they’ve been eating each other since December, and it’s not stopping,” he said.

Steve Henry, whom the Australian government has labeled the country’s top mice plague expert, said it was easier to predict the beginning of an outbreak than the conclusion of one.

The scene he painted for the eventual denouement was one of vermin apocalypse. The tail end of a mouse plague, Henry said, arrives when “there’s too many mice in the system; they’re all interacting with each other and disease spreads quickly. At the same time, they’re running out of food, so they’re turning on the sick and weak, and they’re attacking and eating their babies.”

He warned that if the mice survive the winter in large numbers, their populations would explode again in the spring and cause even more damage.

Until it’s all over, the plague will continue to take a psychological toll in remote areas, where people are largely self-reliant and often face setbacks with the mindset that you take it on the chin and get on with it.

Jo Randall, who lives about 75 miles south of the Fragars, said she had been brought to tears one morning as she contemplated the extra work the mice were creating on top of an already laborious farm and home life.

The Randalls consider themselves lucky because they’ve been able to keep the mice out of their fields, through baiting and burning of the land.

But they live in an old house, full of tiny cracks and holes for rodent intruders to slip through. Even in the morning cold, she has to open the windows to alleviate the odour.

Signs of mice are all around: Randall’s phone case has been chewed ragged at the edges, the family’s stereo system has been destroyed, and there are scores of tiny teeth marks in the handle of a pair of scissors on the counter.

She thought the last straw would be if the mice ever got into her bed. But when it actually happened — when she found droppings in her good sheets at 10.30 pm after an exhausting day — she just sighed, stripped the sheets and made the bed again.