No 31 seed Anastasia Pavlyuchenkova of Russia and 85th-ranked Tamara Zidansek of Slovenia each earned her first berth in a major semi-final. 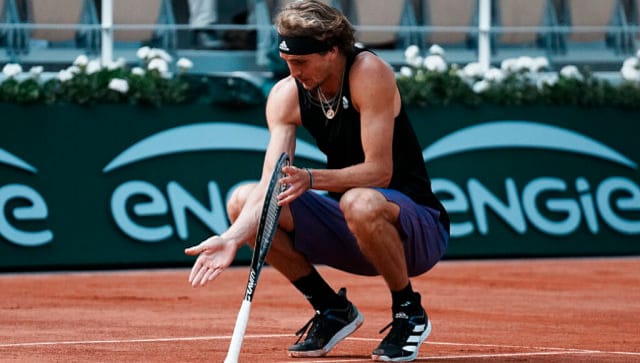 Alexander Zverev shows the mark on the clay as he plays Alejandro Davidovich Fokina during their quarter-final at the French Open. AP Photo

Alexander Zverev did not want to believe that his opponent in the French Open quarter-finals had saved a break point with a shot that landed on — or was it merely near? — a line in the fourth game on Tuesday.

So Zverev crouched down near the mark on the red clay and engaged in a bit of an argument with chair umpire Alison Hughes, repeatedly saying, “No!” and then “How?”

Hughes, whose call was backed up by an unofficial video rendering shown on TV, didn’t budge, and Zverev quickly lost that game, then the next one, too, to fall briefly behind. Could have been the start of an unraveling.

Instead, Zverev recovered quickly, grabbed 16 of the remaining 19 games and easily moved into his third Grand Slam semifinal by defeating Alejandro Davidovich Fokina 6-4, 6-1, 6-1.

The No 6-seeded Zverev, the US Open runner-up to Dominic Thiem last year, will participate in his first semifinal at Roland Garros against either No 2 Daniil Medvedev or No 5 Stefanos Tsitsipas. Their quarter-final was scheduled for Tuesday night.

In the two women’s quarter-finals played earlier in the day at Court Philippe Chatrier, No 31 seed Anastasia Pavlyuchenkova of Russia and 85th-ranked Tamara Zidansek of Slovenia each earned her first berth in a major semi-final.

“Mentally it was really, really hard this morning,” the 29-year-old Pavlyuchenkova said. “Especially since I needed to play Elena.”

Rybakina managed to eliminate 23-time Grand Slam champion Serena Williams in the fourth round but wasn’t able to play as well against Pavlychenkova.

Before last week, Zidansek never had advanced past the second round at any Grand Slam tournament.

Indeed, her biggest triumphs as an athlete might have come in an entirely different sport: She was a junior national champion in snowboarding.

But spurred on by the vocal support of her coaching team on Court Philippe Chatrier, Zidansek got past No. 33 seed Paula Badosa 7-5, 4-6, 8-6.

There were 15 service breaks in that match and Badosa acknowledged being a bit undone by her nerves.

She threw her racket at the changeover after falling behind 6-5 in the third set.

“I guess I managed to keep my composure today a little bit better than her,” Zidansek said.

Zverev was able to contain whatever was roiling inside after what, to him, perhaps felt like a critical moment — even if it came after just 20 minutes of play against the 46th-ranked Davidovich Fokina, a 22-year-old from Spain who loves to use drop shots.

But after getting broken three times in the opening set, Zverev never faced so much as one break point the rest of the way.

And he played so much more cleanly that Davidovich Fokina, who wound up with 37 unforced errors to Zverev’s 16.

But Zverev hasn’t dropped one since, completing a comeback in five against Otte to start a run that has now stretched to 15 sets in a row.