Mumbai. In the last episode of Star Plus TV show Anupama, Anupama is facing many problems in her life. Anupama has given Vanraj and Kavya a place to run a cafe in their dance academy. Now Rakhi Dave and Kavya were insulting the entire Shah family for distributing cafe pamphlets.

Anupama will categorically refuse to go to the cafe in the upcoming episode of the show. She says she has dance classes for her housewife. Just then a customer comes to the cafe who orders a keto sandwich made by Anupama. Ba makes sandwiches in Anupama’s absence. She says that Anupama has taught her to make sandwiches so that if the customer comes, she can give it to him.

Kavya accepts Rakhi’s help
Rakhi then suddenly visits the cafe. She says that she had sent some customers. Everyone is shocked to hear this. Later, she offers to help Vanraj with money. Vanraj flatly refuses but, Kavya immediately accepts the help. Rakhi wants to make sure that her daughter Kinjal leaves the house without any guilt. 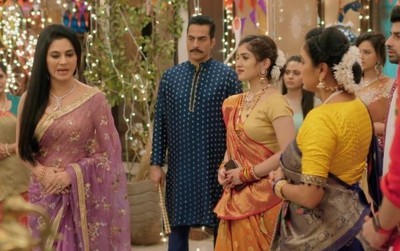 Effect on Vanraj and Kavya’s relationship
In the upcoming episode of Anupama, Kavya’s hasty action turns Vanraj and his relationship sour. Now it has to be seen whether Rakhi’s plan is successful or not.

Let us tell you that there is going to be a new entry in Anupama. According to reports, Sunita Rai will be seen entering the Star Plus show Anupama. Sunita is known for her stellar performances in projects like Bye Bye.