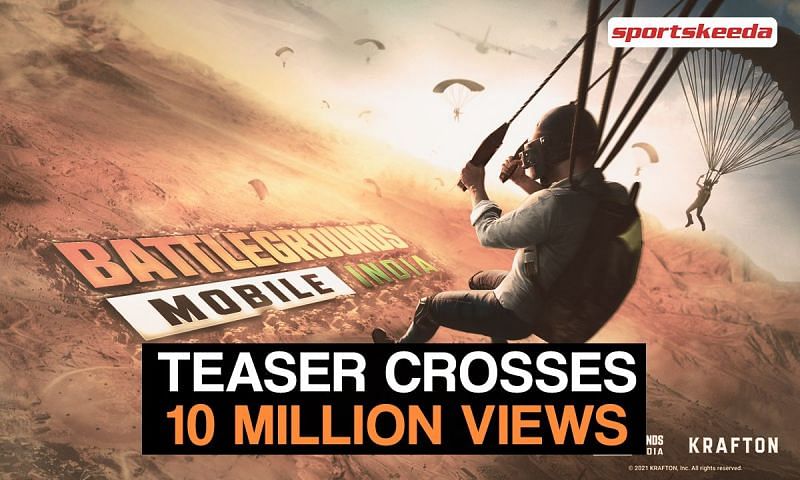 Battlegrounds Mobile India’s teaser, which was released on May 6, 2021, now has more than 10 million views on YouTube.

PUBG Mobile is a game that the Indian audience is quite passionate about. The title has a vast audience and playerbase in the country that has been looking for replacements for the game ever since its ban on September 2, 2020. Fortunately for the players, Krafton announced a localized Indian version via a press release on November 14, 2020.

Almost six months after the press release hinted at an India-specific version of PUBG Mobile, Krafton, the South Korean gaming giant revealed Battlegrounds Mobile India. Soon after, a teaser was launched on the official Facebook and YouTube channel.

The announcement by Krafton has received an overwhelming response from the players.

As stated above, the teaser titled “BATTLEGROUNDS MOBILE INDIA” was uploaded on the YouTube channel. The 10-second clip has achieved the milestone of 10 million views and has been trending on YouTube.

At the time of writing the article, the video has more than 11.2 million views and 982k likes, along with 23k dislikes. Meanwhile, the logo reveal video has crossed the 6.7 million views mark.

The sheer volume of views indicates the game’s popularity and excitement among players in the country.

Battlegrounds Mobile India’s announcement has caught the attention of mobile battle royale enthusiasts as the game claims to offer a world-class AAA multiplayer gaming experience. The title will only be available to Indian players and will feature in-game content for local users.

Besides this, upon its release, the game is set to have its esports ecosystem with leagues and tournaments in place to foster the overall growth of the competitive scenario.