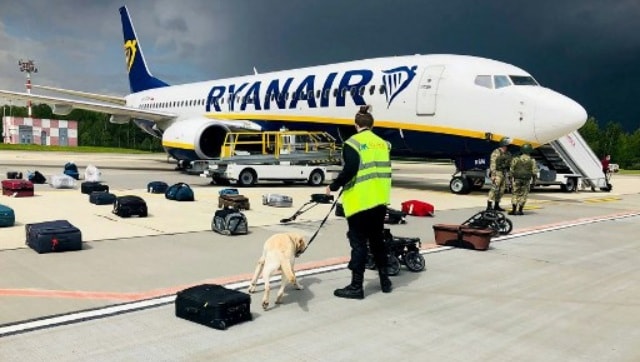 Roman Protasevich was held on Sunday after a Ryanair flight from Athens to Vilnius was intercepted by a Belarusian fighter jet and diverted to the capital of Minsk, State TV reported A Belarusian dog handler checks luggages off a Ryanair Boeing 737-8AS (flight number FR4978) parked on Minsk International Airport’s apron in Minsk, on May 23, 2021. AFP

Dublin: Belarus secret police are believed to have been present when a dissident journalist was detained when his plane was diverted to Minsk, the head of the Irish airline said on Monday.

Roman Protasevich was held on Sunday after a Ryanair flight from Athens to Vilnius was intercepted by a Belarusian fighter jet and diverted to the capital of Minsk, state TV reported.

“It appears the intent of the authorities was to remove a journalist and his travelling companion,” Ryanair chief executive Michael O’Leary told Ireland’s Newstalk radio.

“We believe there were some (Belarusian security agency) KGB agents offloaded at the airport as well.”

Dublin-headquartered Ryanair is renowned for ultra-low-cost, short-haul flights across the continental bloc.

Favoured by budget holidaymakers, the carrier is an unlikely participant in a high-stakes diplomatic crisis.

The Irish government also blamed Belarus for the diversion and called for a tough response from Brussels.

“I think there has to be real edge to the sanctions that are applied on the back of this.”

EU leaders are to meet later on Monday and are expected to toughen sanctions against the eastern European state.

“It was an Irish airline, a plane that was registered in Poland, full of EU nationals, travelling between two EU capitals,” Coveney said.

“This can only be described as aviation piracy,” he added.

“I think the EU has to give a very clear response to it otherwise we’re giving all the wrong signals.”

“The escalation of violence in Belarus is the result of impunity, so we have to put much more pressure on the regime.”

Protasevich’s friend, Franak Viacorka meanwhile told BBC radio in London there was “no possibility of coincidence… no possibility that this plane was moved to Minsk because of other reasons”.

Viacorka said he was in touch with his friend before he left Athens and said Protasevich was concerned that he was being followed in the airport.

“I can’t imagine what’s happening to him right now,” he added.

“His girlfriend was arrested with him. She’s a Russian citizen. They both were taken on the same flight… They will be taking revenge, they will be punishing them both.”