UP: Ganga Expressway will be like this, 519 villages will be connected with it (symbolic picture)&nbsp

New Delhi: The construction work of the much-awaited Ganga Expressway connecting the eastern and western parts of Uttar Pradesh will begin in September. UP Chief Minister Yogi Adityanath had already said that the construction work of the 1,020-km-long expressway is about to begin as the state government has acquired more than 80 to 90% of the land required for the project. This expressway will be the second longest expressway in India. Let’s know how the Ganga Expressway and its features will be

519 villages will be connected with the project

According to reports, the Uttar Pradesh Expressway Industrial Development Authority (UPEDIA) has already made preparations to float tenders for the project connecting Meerut with Prayagraj. The issuance of tenders to civil contractors will probably start in August 2021. The project may be extended to Varanasi in future. The expressway will connect 519 villages.

These districts will be included

The construction work of this project is expected to cost Rs 36,000 to 42,000 crore and is expected to be completed in 26 months. The total cost of construction of the first phase of the project has been estimated at Rs 35,952 crore. The funding for this project will be done by a combination of 70% debt and 30% equity. The third expressway in UP will start near Bujauli village in Meerut and end at Judapur Dandu village in Prayagraj. The first phase of construction of the expressway will be 596 km long and will cover districts of Meerut, Jyotibha Phule Nagar, Hapur, Sambhal, Badaun, Shahjahanpur, Farrukhabad, Hardoi, Unnao, Rae Bareli, Pratapgarh and Prayagraj.

It will have 14 major bridges, 126 minor bridges, eight road overbridges and 18 flyovers. A one kilometer bridge over Ganga will be built on the expressway and another 720 meter bridge will be built over Ramganga. The expressway will have nine public convenience complexes, 2 main toll plazas and 12 ramp toll plazas. Opportunities will also be available for establishment of Industrial Training Institute, Educational and Training Institute, Medical Institute etc. near the expressway. The Yogi government of Uttar Pradesh, which is taking the dream of Bundelkhand and Purvanchal Expressway on the ground, has now started ‘Ganga Expressway’. Preparations have started on war footing. For this, Chief Minister Yogi Adityanath has directed all the concerned departments including UPEDA to work in ‘mission mode’.

On 29 January 2019, Yogi Adityanath had given green signal to the construction of ‘Ganga Expressway’ along the Ganges stream. The length of this express to be built in two phases will be 1020 km, which is a record in itself. This will be the longest expressway in the country. In the first phase of 602 km, it will reach Prayagraj from Meerut via Amroha, Bulandshahr, Badaun, Shahjahanpur, Kannauj, Unnao, Rae Bareli, Pratapgarh. In the second phase, a section will be 110 km from Garhmukteshwar to Uttarakhand border and a section of 314 km will connect Prayagraj to Ballia. 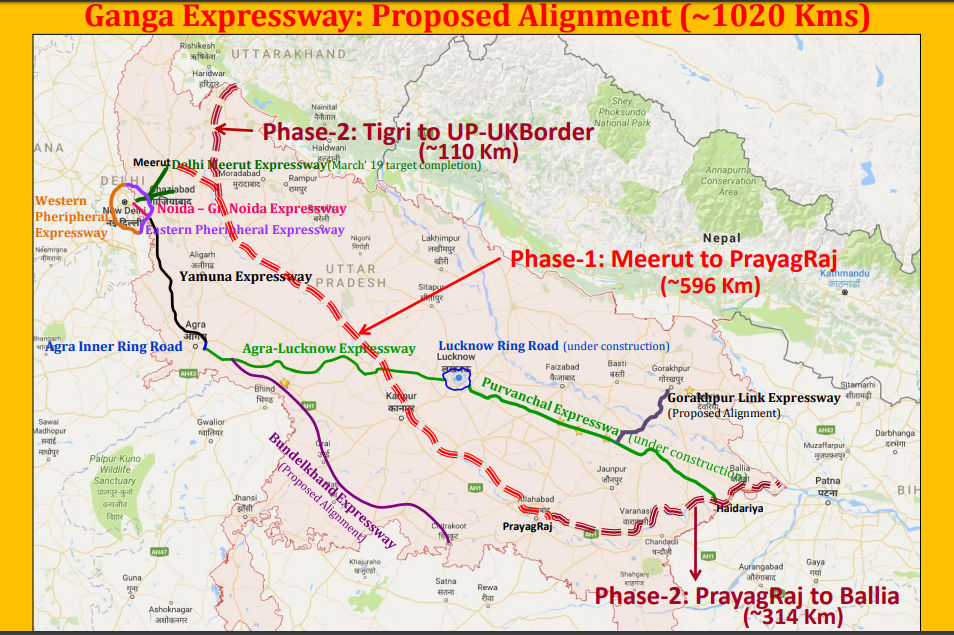