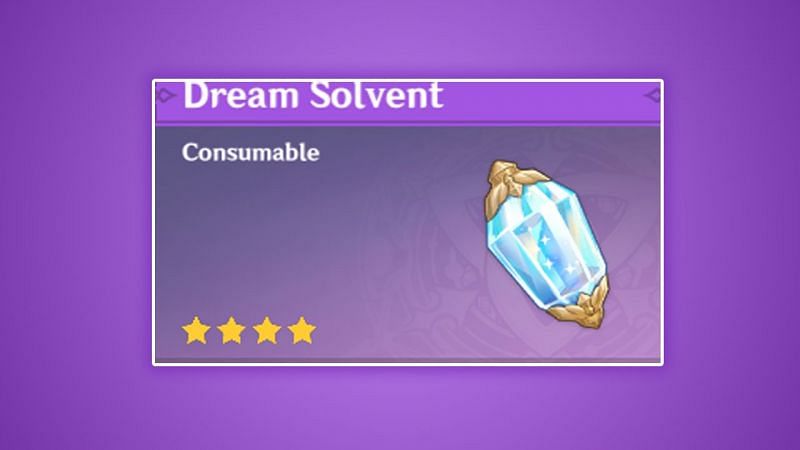 Genshin Impact has added a very useful item with its last update, Beneath the Light of Jadeite, and some players may have missed out on this new convenience. Dream Solvent allows players to transmute Weekly Boss Materials into other materials from the same pool, making levelling character talents much easier.

Previously, if a player did not get a certain boss material, they would have to wait an entire week to level up a talent. But now, with the addition of Dream Solvent, players can just swap the material. Players can learn how to use this material here.

Genshin Impact: How to use Dream Solvent to craft talent materials

via an unknown source
It appears the future version will permit the ability to exchange Boss Talent Materials by using Dream Solvents dropped by the weekly bosses. A reference to the Solvent is on https://t.co/z30Mq5av4Q but the page is not presently populated. pic.twitter.com/HXhtOO4rgr

Dream Solvent is a new addition to Genshin Impact that allows players to transmute their Boss Materials into the ones they need for the characters that they are leveling. This solves a huge problem that many Genshin Impact players faced, where they were unable to level their character’s talents due to poor RNG with weekly bosses.

Now, with Dream Solvent, players should regularly be able to swap out their Boss Materials with alternatives so that all of their characters can be leveled.

How to get Dream Solvent in Genshin Impact:

so today was a rly good boss drop week!! pic.twitter.com/Rl937a4kmU

Dream Solvent drops from Weekly Bosses in Genshin Impact at a decently high rate. The chances are not guaranteed, but they seem to be much higher than Prototypes, meaning players will usually get at least 1-2 Dream Solvent a week.

Players can currently challenge four Weekly Bosses in Genshin Impact, making getting Dream Solvent part of their regular weekly tasks. After acquiring Dream Solvent by receiving the boss rewards, the ingredient will simply stay in the player’s inventory until it is used.

How to use Dream Solvent in Genshin Impact:

To use Dream Solvent, players need to follow a few simple steps starting with an alchemy table.

After these steps are completed, players will instantly have whichever Boss Material they were trying to craft, while losing the one they used as the ingredient. If players wish to switch to a more plentiful ingredient, they can click the small paper in the bottom right corner to change the material being used, which proves helpful for players who have an excess of a certain material.

Players should also remember that materials can only be transmuted within a single pool of items, so they will still have to face each boss. Each transmutation costs 1 Dream Solvent, meaning players should be careful with their crafting to make sure they can get everything they need.

Dream Solvent is definitely one of the most useful things that has been added to Genshin Impact, and every player should take advantage of this crafting material.