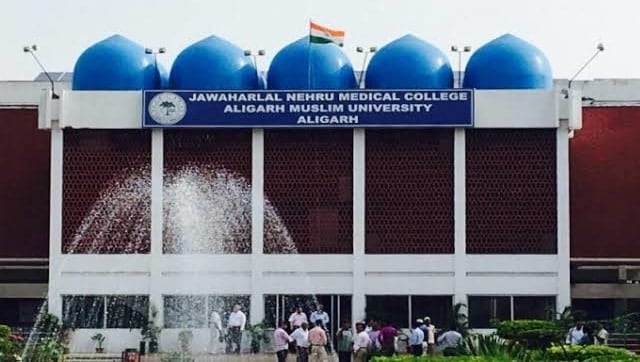 Despite a graveyard inside the university campus where most of the recent faculty burials have happened, colleagues and friends have been unable to bid final goodbye as a palpable threat to their own lives looms

The second wave of COVID-19

pandemic has created new levels of panic and anxiety but as Albert Camus says, “Panic suggests a response to dangerous but short term condition from which we can eventually find safety but there can never be safety and that is why we need to love our damned fellow humans and work without hope or despair for the amelioration of suffering. Life is a hospice, never a hospital.”

Recently when Aligarh Muslim University saw its most fertile minds – a dozen of faculty members – depart one after another within a span of two days, the fear in Aligarh rose to its peak with rapid loss of lives and rising number of affected people.

Professor Aftab Alam of the department of Political Science, AMU says that in his entire career and during all his days in Aligarh he has never witnessed such a huge loss in such a short duration. He says that every sound of message-notification on his phone makes him apprehensive as he checks his phone with a wary look on his face and with a fear of getting another bad news.

In his own words,“phone ki har awaz par lagta hai koi buri khabar na a jaye.” There is also a problem of media (mis)representation that has heightened the tension. Alam feels when the overall cases were below 1 lakh, media houses were disproportionately projecting the reality and now when the situation is almost out of control, they are not doing the job of showing the correct picture to facilitating the availability of help and resources from different corners.

The Office of the Medical Superintendent, Jawaharlal Nehru Medical College Hospital, AMU, has come out with a circular about the scarcity of oxygen in the hospital indicating its helplessness in saving lives and giving timely relief to the patients. People are making frantic calls to senior faculty members for help and attention but everyone seems to be more helpless during this wave. During the first wave of the virus, people felt more assured about the availability of medicines and oxygen but this time every possible life-saving facility seems to be falling short. Injections and medicines are being arranged from Delhi and other places.

A university faculty member’s sister admitted in Aligarh’s Varun hospital has been struggling to get Remdesivir for a few days now. Her parents, too, are struggling with breathlessness while waiting for their Covid-test reports.

Despite a graveyard inside the university campus where most of the recent faculty burials have happened, colleagues and friends have been unable to bid final goodbye as a palpable threat to their own lives looms. Many faculty members are torn between their feelings of guilt and grief at the same time.

Currently, the faculty community is brooding over combining resources to procure ventilators for the trauma centre of the medical college. However, even if these facilities come through, the medical college has explicitly informed about the existing human resource shortages, projecting the difficulties at multiple levels and their intertwined nature. Amid grief and despair, some colonies in Aligarh have found ways to maintain minimum exposure of their colony members. They have decided that when one person of the colony goes out to buy the essentials, she/he checks with every household about their requirements and gets things for everyone. This is being done on a rotational basis. This time, unlike the first wave, people are not out on the streets to offer help indiscriminately as they are more cautious and fearful.

When someone asks for help regarding ration and other essentials, people ask them to make them talk to the shopkeeper or the mart people and after enquiring to their satisfaction they pay directly to the shop or mart, online.

Some people feel that the situation went out of hand because most of the precautionary measures taken by the government during the first wave gradually relaxed and the situation started appearing to be normal. The system of sealing and barricading was relaxed after a few months of the first wave.

While some feel the awareness about vaccination was also not spread in the manner required for it to be taken more seriously, others feel that the overemphasis on vaccines relaxed people to the extent that they started taking the pandemic quite lightly. People also feel that the trumpet of triumph of humans over the virus through vaccination was overplayed. It is neither a rich person’s disease nor brought in by people living in poverty. Ironically though people like Chuttan of Dibai near Aligarh who has his tea stall in Aligarh and Munni living in the upper fort area of Aligarh who works on a hand-machine for a lock-making factory, are not entirely wrong in feeling that they would have never got any attention in terms of healthcare due to their invisible position and status in the social order.

They say that while the rich can also afford and avail themselves of things from the black market to save their people, they can’t even arrange that.

Farman, who works as a driver in Aligarh on contracting Covid could not believe that it actually happened to him; his entire family stayed in denial for quite some time till Farman was quarantined in one of the hospitals in Aligarh and witnessed the gravity first-hand.

The sense of bereavement has taken over many cities of Uttar Pradesh including Prayagraj (Allahabad), Lucknow, Gorakhpur, Kanpur, Varanasi, along with many other parts of the country. In Uttar Pradesh, some measures of barricading and blocking the Covid-affected areas are brought back as preventive measures, as seen in some parts of Prayagraj (Allahabad), which is one of the four worst-hit districts of Uttar Pradesh, only second to Lucknow followed by Varanasi and Kanpur.

Referring back to The Plague by Camus, it is written that the only way to fight plague is with decency and decency consists in doing the job. In the present national crisis, the onus of ‘doing the job’ rests with the government, healthcare workers, other frontline functionaries, and people – in the order of their respective capabilities.

The author is an assistant professor of Sociology, Advanced Centre for Women’s Studies, Aligarh Muslim University