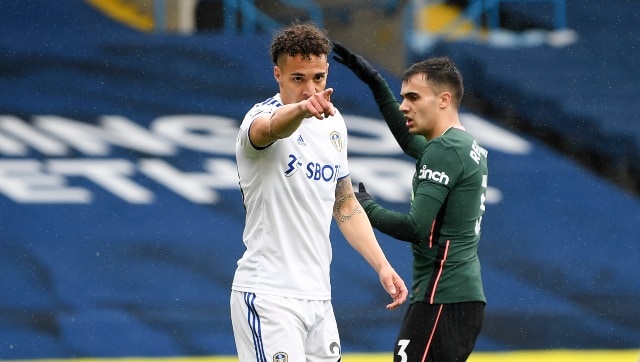 Son Heung-min cancelled out Stuart Dallas’s early goal for Leeds midway the first half but Patrick Bamford restored the home side’s lead shortly before the break and substitute Rodrigo struck late on. 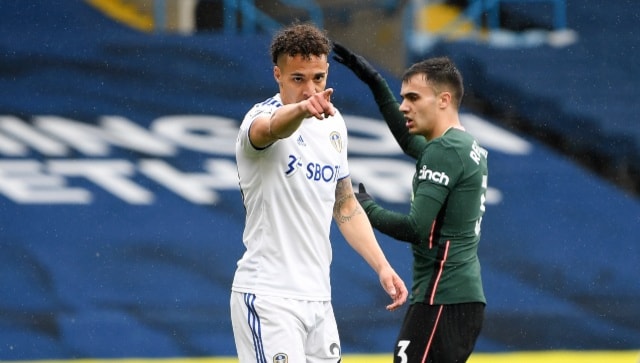 Rodrigo celebrates after scoring for Leeds against Tottenham. AP

Son Heung-min cancelled out Stuart Dallas’s early goal for Leeds midway the first half but Patrick Bamford restored the home side’s lead shortly before the break and substitute Rodrigo struck late on.

It means Tottenham, beaten Champions League finalists in 2019, are almost certain to miss out on playing in Europe’s elite club competition for a second consecutive season.

Leeds, who climbed above Arsenal into ninth place with the win, took an early lead when Dallas smashed home after Spurs failed to deal with a teasing cross from Jack Harrison.

Harrison fizzed the ball across the box from the left and Tottenham goalkeeper Hugo Lloris did well to keep the ball out after Sergio Reguilon nearly put through his own goal.

But Lloris could nothing to prevent Dallas from smashing home from close range at the back post.

But Leeds regained the lead in the 42nd minute as Bamford finished from close range for his 15th goal of the season following Ezgjan Alioski’s cut-back.

Harry Kane had a goal ruled out for offside early in the second half as Spurs pushed for an equaliser and then rattled the bar from a free kick with less than 20 minutes to go.

But it was Leeds who struck again to seal the three points, with Rodrigo finishing after a cross from fellow substitute Raphinha with just six minutes left.

Crystal Palace secured their survival by beating already-relegated Sheffield United 2-0. Whether Roy Hodgson will manage the team in their eighth successive season in the English Premier League remains unclear.

Palace scored after only 67 seconds to end a three-match losing run on Saturday. Eberechi Eze’s driving run down the centre of the pitch from just inside the visitors’ half saw him skip between three defenders before rolling the ball to Christian Benteke, who was unmarked down the left side of the penalty area.

His shot was tame and would have been a simple enough save for goalkeeper Aaron Ramsdale but a deflection off the studs of George Baldock left him stranded and with no chance as the shot looped over his despairing dive.

The second and decisive goal came in the 88th minute courtesy of another wonderful solo run by Eze, although it was another deflected goal. The winger slipped away from John Lundstram midway inside his own half by the touchline and embarked on a driving run towards the Blades goal.

He had options to set up a teammate but decided to shoot, with his effort striking John Fleck and wrong-footing Ramsdale once more.

The 73-year-old Hodgson, who previously coached England, has been in charge of Palace since 2017 and has yet to sign a new deal.

With inputs from AFP and AP.