Deepika Padukone wore these clothes at Jiah Khan’s funeral, is being auctioned, trolled on social media

Mumbai. Deepika Padukone is going to auction some of her clothes soon. But, along with this, she has also been embroiled in controversies. On social media, users are calling Deepika even as cheap. 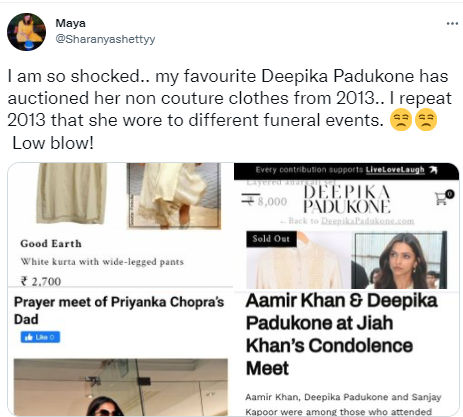 money will donate
According to reports, Deepika Padukone will donate the money received from this auction to the NGO ‘Live Love Laugh Foundtaion’. On this social media user wrote, ‘Don’t defend that Deepika Padukone is doing it for charity. False 10 or 15 years old are auctioning off ordinary brand clothes. Why can’t you give it to those working in the house.’

See also  Birthday: Arbaaz Khan is the owner of crores of net worth, has gifted a flat of three crores to his girlfriend